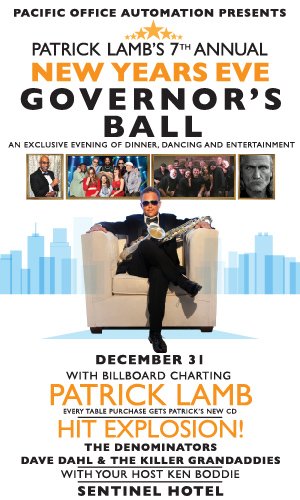 The Governor’s Ball came to fruition to fulfill a need for a more high end and discerning premiere clientele. With it’s vaulted ceilings at the most beautiful hotel in the city with a 3 course dinner by Jake’s included with every reserved ticket, you can come to the truly PREMIERE experience with your date for a next level event, or just come later after 10 with a group for dancing. No cheap or cold buffets. No poor service. “A higher end experience for A sophisticated discerning clientele” now in it’s 7th year.

PATRICK LAMB AND HIT FACTORY
Simply one of the Northwests most widely known and acclaimed artists. Patrick’s last three singles recently made top 5 nationally on the Billboard Charts on his independent label, and Patrick has been inducted as one of the youngest members into the Oregon Music Hall of Fame. Recently given the Independent Spirit Award by the City of Portland Patrick regularly tours the the world or shares the stage as the ‘saxophonist to the stars’ with with Grammy winners and luminaries. Get ready to party!

HIT EXPLOSION!
Voted “Best Live Performance Cover Band” by the Northwest Music Awards Association, Hit Explosion performs authentic, classic 70’s and 80’s dance hits as well as hits from today, combining exceptional musicianship with an electrifying presentation. The group sets itself apart by its diverse and talented lineup, allowing for impressive reproductions of the original hits from the 70s, 80s and beyond. Since its inception, the band gained sudden success and has remained at the zenith of the “disco explosion” craze, an ensemble possessing a rare and unique chemistry, with that “special something” igniting even the toughest crowds. From college to corporate, from kids to seniors, Hit Explosion is notorious for their ability to captivate & energize diverse audiences.

“Find your passion and pursue that as a career. You’ll be a lot happier, and you’ll naturally put in the effort to be successful”

Ken Boddie is co-anchor of “KOIN 6 News This Morning “ every weekday, and produces a weekly segment called “Where We Live”, which gives Portland viewers the backstory of local landmarks, events, street names, and historical figures.

In 2016, Ken was awarded one of Portland’s highest civic honors when he was named an honorary Royal Rosarian. He has received numerous civic awards, and has been recognized by the Associated Press for his work.

Ken is also known for his community work, especially with young people. He is a former Board Member of PDXJazz, which produces the Portland Jazz Festival every February. His support of local musicians is well-known, as he often acts as emcee for events in Portland’s vibrant music scene.

Sponsor tables (not available online) include all of the above plus:

General Admission After 10 Dance Party – $115 per person, no reserved seating, no dinner by Jake’s entrance at 10pm when dancing begins to bring in the new year!

General Admission After 10 Dance Party 4 pack $420 no reserved seating, no dinner by Jake’s entrance at 10pm when dancing begins to bring in the new year!

General Admission After 10 Dance Party 8 Pack $800 no reserved seating, no dinner by Jake’s entrance at 10pm when dancing begins to bring in the new year!