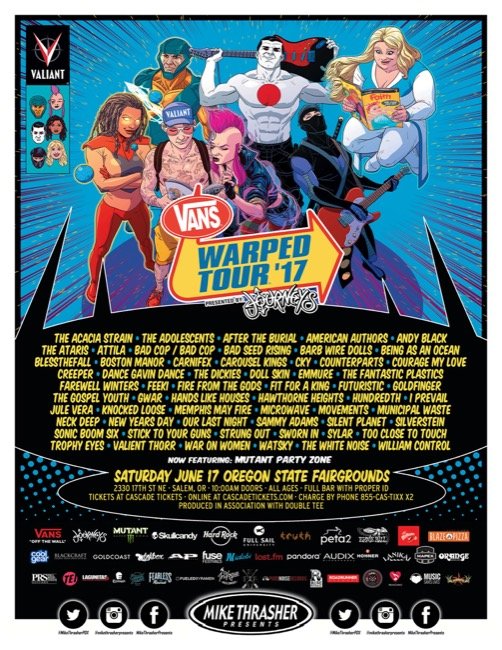 From loudwire.com: Warped Tour just revealed its full lineup and confirmed the official routing for 2017! This year’s bill is surprisingly heavy, catering to metalheads with the addition of GWAR, Municipal Waste, The Acacia Strain, Hatebreed and more!

2017 will mark the 23rd year of Warped Tour’s legendary run. The summer celebration of rock has morphed in countless directions over the years, first rising to prominence as a one-stop shop for your favorite punk rock acts. This year, rock is represented in many forms, including its heaviest bastard cousin, metal.

You may want to keep your eye on the Monster Mutant South Stage, which will serve as home for GWAR, Emmure, Carnifex, Blessthefall, Silverstein and more. The Monster Mutant North Stage will also showcase the fest’s heavier acts like Hatebreed, The Acacia Strain and Candiria.

The punk and thrash fans will want to stay close to the Hard Rock Stage, featuring Municipal Waste, Sick of it All, Anti-Flag, The Adolescents, Suicide Machines and more.