We are giving away a $50 gift certificate for dine-in at Central Kitchen. To win, comment on this post why you’d like to attend. Winner will be drawn and emailed November 2. 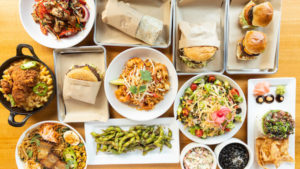 “We’ve been incubating this idea of a kitchen with no dining room, focusing on take out and delivery, for the last year,” explained Plew, President and CEO of Concept Entertainment (CEG), which owns the Grand Central building in the heart of Southeast Portland. “The pandemic really put the process into hyperspeed. The mandated shutdown caused us to reassess the Grand Central Restaurant & Bowling Lounge: we had a kitchen, off-street parking, and a dedicated team that could make this idea a reality. We chose to rebrand as Central Bowl, Arcade & Food Hall and can’t wait to share this exciting new concept with the local community!”

Customers and delivery drivers––Central Kitchen will also be available from the main food delivery services––will pick up orders from a window that is being created from a newly renovated space at 816 SE 8th Ave. A number of parking spaces will be designated for take out orders in the parking lot on the west side of the building.

Plew and Castro have worked together for a decade at CEG, a hospitality management company headquartered in Portland. Plew originally brought Castro on board as VP of Food and Beverage Executive Chef to elevate Thirsty Lion’s food platform. Castro previously served as Executive Chef for Pacific Coast Restaurants, which included City Grill, Henry’s Tavern, Stanfords, and Newport Bay. CEG is the outfit behind the Gypsy, The Lotus, and other Portland hot spots; it is perhaps best known for founding Thirsty Lion Gastropub and Grill and scaling the brand to expand regionally. Thirsty Lion operated in downtown Portland from 2006 to 2017 and still has Oregon locations in Tigard and Hillsboro, plus eight stores in Arizona, Colorado, and Texas. In 2018, Full Service Restaurant News (FSR) named Thirsty Lion one of 12 of the most successful emerging restaurant chains in the country.