We are giving away a pair of tickets to Nefesh Mountain @ The Old Church Concert on December 1. To win, comment below on this post why you’d like to attend. Winner will be drawn and emailed November 28. 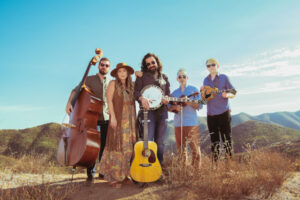 Since their arrival on the scene in 2015, Nefesh Mountain has been hailed as one of today’s formative boundary pushing Bluegrass/Americana bands. In a testament to the unbridled imagination and extraordinary grace of their musicianship, each track on Songs for the Sparrows ineffably evokes the sensation of roaming through the unknown. True to the album’s spirit of loving inclusivity, Lindberg and Zasloff, have created an elegantly wayward sound by melding elements of everything from Americana and Appalachian bluegrass to Celtic folk and Eastern European music. Not only a reflection of their vast musical knowledge, that open-hearted embracing of so many eclectic genres also speaks to the joyful curiosity that animates every aspect of their artistry.

Writing thirteen of the fourteen tracks, the duo looked back on a life-changing trip to Eastern Europe in 2018. “We tracked down the towns where our families are from, and it was devastating to see the destruction of the Holocaust firsthand, and to know that we’re not so far removed from that time,” says Lindberg. “” ‘Songs For The Sparrows’ ultimately came from that experience, and from thinking about the many groups of people who are horribly discriminated against in the U.S.” Zasloff adds: “To us, sparrows represent a small but mighty voice. That’s why we chose to name the album for them—they’re often overlooked, but they’re beautiful and everywhere.” Lindberg and Zasloff are the heart of this eclectic band, alongside longtime bandmate and fiddle player Alan Grubner, David Goldenberg on mandolin, and Max Johnson on bass.