We are giving away a pair of tickets to Wild Rivers: Sidelines World Tour 2022 @ Aladdin Theater on September 20. To win, comment below on this post why you’d like to attend. Winner will be drawn and emailed September 12. 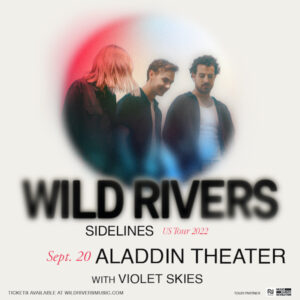 $1 from every ticket sold will be donated to Reverb’s Music Climate Revolution to make this a carbon positive tour.

“The more I see, the less I know about it.” It’s one of the first, most prominent lyrics on Sidelines, the much-anticipated full-length album from indie trio Wild Rivers. The phrasing is brief but says everything about adjusting to young adulthood — and beyond. The world places infinite pressure on us to have a plan for the future, but, as Wild Rivers eloquently articulate throughout Sidelines, it’s healthier to acknowledge — and even embrace — the not knowing.

Comprising Khalid Yassein [guitar, vocals, keys], Devan Glover [vocals], and Andrew Oliver [lead guitar, synths], Toronto’s Wild Rivers have a gift for penning introspective lyrics and genre-fluid melodies that transmit wisdom beyond their years. The 10-track Sidelines, co-produced by Peter Katis (The National, Interpol, Sharon van Etten) and Wild Rivers and recorded in Connecticut, Los Angeles and Khalid and Devan’s college town of Kingston, Ontario, touches on coming-of-age themes, such as learning how to be more present and coming to terms with life’s unpredictability.

Together, right before their first show, the band decided on the name Wild Rivers “in a Subway restaurant,” laughs Andrew. “Our friends were going to be there and there was a lot of pressure on making a big reveal, just cause we had really left it to the last minute,” adds Devan. “There wasn’t too much thought put into it. We just were like, ‘okay, this sounds cool. I’m going to get a foot-long’”.

As they embark on the next chapter of their journey, Wild Rivers, who first caught audiences’ attention with their 2016 self-titled debut, followed by two EPs (2018’s Eighty-Eight and 2020’s Songs To Break Up To), are especially eager to take Sidelines on the road. The live setting is where they originally cultivated a dedicated following and opening for celebrated acts like The Paper Kites, Donovan Woods and Jake Bugg. Building an authentic relationship with fans, while channeling classic singer-songwriters like James Taylor and Fleetwood Mac, has been vital to Wild Rivers’ connection with audiences.