We are giving away a pair of tickets to Wavves King of the Beach Tour @ Aladdin Theater on July 25. To win, comment below on this post why you’d like to attend. Winner will be drawn and emailed July 18. 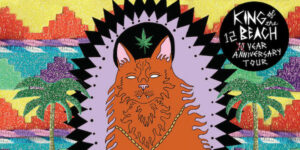 Nathan Williams, under the name Wavves, is a noise pop musician and landlord based in Los Angeles, California. He released his self-titled debut LP in 2008 and has since gained notable media attention from the internet, and other areas including Pitchfork and ABC News. After gaining recognition, Ryan Ulsh was enlisted as a touring drummer and Wavves embarked on their first US and European tours. Originally signed to Fat Possum Records, he released his second full-length album Wavvves with them in 2009 and his third album, King of the Beach, on August 3rd 2010.

King of the Beach features a complete rhythm section comprised of Stephen Pope and Billy Hayes, both formerly of the late Jay Reatard’s touring band. They toured for almost a year straight until Hayes left the band for some time off. Jacob Cooper, former drummer of The Mae Shi, has since taken his place. After playing the major festival circuit, Nathan started his own record label Ghost Ramp and released the Life Sux EP on September 20th 2011.