We are giving away a pair of tickets to Asleep at the Wheel @ Aladdin Theater on July 23. To win, comment below on this post why you’d like to attend. Winner will be drawn and emailed July 18. 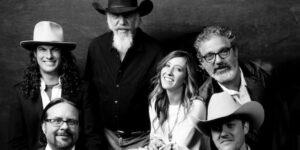 Fifty years ago, Asleep at the Wheel’s Ray Benson wrote in his journal that he wanted to form a band to bring the roots of American pop music into the present. It seemed like an ambitious goal for a 19-year-old, yet Benson has done exactly that – traversing the globe as an ambassador of Western swing music and introducing its irresistible sound to generation after generation. Although the lineup has changed countless times since its inception, Benson’s mission has never wavered.

That merging of past and present is effortlessly woven throughout two of the band’s new releases. First, their Better Times EP compiles three new tracks: “All I’m Asking,” a rousing plea for a second chance; the hopeful title track, about getting back to life as it once was (namely, before the pandemic); and “Columbus Stockade Blues,” a traditional tune arranged in the spirit of Willie Nelson and Shirley Collie’s 1960s version. Then, in the fall, a career retrospective recorded with the new band — and a few special guests — will carry Asleep at the Wheel back onto the road, where they’ve remained a staple for five decades.

“I’m the reason it’s still together, but the reason it’s popular is because we’ve had the greatest singers and players,” Benson explains. “When someone joins the band, I say, ‘Learn everything that’s ever been done, then put your own stamp on it.’ I love to hear how they interpret what we do. I’m just a singer and a songwriter, and a pretty good guitar player, but my best talent is convincing people to jump on board and play this music.”

Raised in Philadelphia, Benson dropped out of college in 1969 and moved to a farm near Paw Paw, West Virginia, to figure out how to put a band together with two friends, Lucky Oceans and LeRoy Preston. Although he gravitated toward honky-tonk and swing music, Benson stood on the opposite side of the generation gap – a young man opposed to the Vietnam War.

Then, in 1970, two hippie buses pulled up to the farm looking for the band they’d heard about. Inside were a ragtag group of musicians calling themselves the Medicine Ball Caravan and they invited Asleep at the Wheel to open their upcoming show in Washington D.C. The fledgling band at this time was centered around guitar, steel guitar, bass and drums.

From that very first out-of-town gig, Asleep at the Wheel steadily built a fan base in D.C., and opened a date for Poco a short time later. However, Benson observes that the reception back home wasn’t always so warm. “We would play these little bars in West Virginia, and they thought because we were hippies, we wouldn’t fight. I stared down a few shotguns,” he says. “I think it was the music that saved us because we were playing real country music.”

Fifty years in, Asleep at the Wheel represent an important cornerstone of American roots music, even though some of its members and audiences represent a new generation. That far-reaching appeal remains a testament to Benson’s initial vision.