We are giving away a pair of tickets to The Murder Capital – Gigi’s Recovery North American Tour on April 11. To win, comment below on this post why you’d like to attend. Winner will be drawn and emailed April 3. 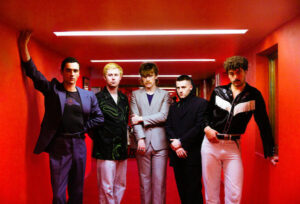 The Murder Capital’s first album ‘When I Have Fears’ had all its songs written and recorded within the first 9 months of the band knowing each other. Now, with ‘Gigi’s Recovery’, the band had to learn to navigate their personal relationships through the relationships they harnessed with these new songs. Without knowing what these songs would sound like, the band knew what they wanted them to feel like- and worked backwards from there- “We had this slightly tongue-in-cheek mantra at the near-beginning of writing this record, it was – The evolution will not be compromised. This kept us on a course, even when we didn’t know where we were going”. And that’s exactly how The Murder Capital ended up with an album that is both totally pure and yet completely confident in its direction.

What happens when we hit the word ‘Exist’? It’s as though the line jolts itself into Existence. This collapsed word marks a change in rhythm, giving the line a new heartbeat, a new life and new meaning. In a way, this opening mantra comes to represent what The Murder Capital mean by ‘Gigi’s Recovery’. For them, ‘Recovery’ is to feel changed: it means returning to a place of strength, “perhaps a strength you never knew you had” and this transformation is wrapped up in their identity as a band and as individuals.

‘Gigi’s Recovery’ fills an entirely different space, an entirely new atmosphere to what came before: ‘We die To keep Our souls As features We hang Them from Our walls’- McGovern sings in The Stars Will Leave Their Stage. In this song we see the band recognise the fallacy of the art, of the high-stakes-second-album: “Looking back it made sense for us to be pushing against each other’s instincts, because at the point we were at after the first record, to make a record that sounded anything like that would have been wild to us.” They were protecting each other, protecting themselves, and ultimately their ‘identity’ as a band. However, as soon as they were gifted the time to chip away (this record being written solidly over a two year period) at the black and white world of ‘When I Have Fears’, only then did they allow themselves to erupt into the purple-heathered bloom of ‘Gigi’s Recovery’.

Though bookended by ‘Existence’ and ‘Exist’ the album is not a smooth incline. Atypically for a concept album, its narrative revealed itself to the band slowly and painfully through the writing process, and so the result is not linear, but sometimes surreal. You are simply dropped into the story of the record. The first single, ‘Only Good Things’, is the album’s climax in a way: “it’s desire, in its most pure form, the desire for goodness and clarity.” In a way, its HD: its lyrics dazzle and the music reaches an almost theatrical richness. However, leaving behind the luscious, sun-soaked beauty of ‘Only Good Things’, The Murder Capital’s second single ‘A Thousand Lives’ coldly lifts the veil. The track opens with a gentle drum and bass beat that mimics falling rain upon your window. It delicately holds the song together, and like the shifting of tectonic plates, it can sometimes sound like it’s on the brink of both collapse and beauty. The way in which it reveals itself slowly, moment by moment, instrument by instrument, matches the ego dissolving state of the song, and of the entire writing process: “So many of the songs started over two years ago as tiny little snippets and for so long we carried these ideas that eventually gained momentum and weight, and as we fought over them their importance and character began to make sense to us.” These ideas grew into songs as the band grew into themselves: ‘A thousand lives with you and I won’t be enough’ James sings, as though each life is a layer within the song, slowly building up and falling away distinguishable or indistinguishable from one another- depending on how you hear it.?A guitar loops, then wraps itself around another guitar line which comes and goes like an image in a dream.? McGovern’s voice has a carefulness and weight to it. His bold melodies act as a reassuring anchor, so we never get totally swept away into the band’s new found soundscape.