We are giving away a pair of tickets to The Mountain Goats @ Aladdin Theater on May 9. To win, comment below on this post why you’d like to attend. Winner will be drawn and emailed May 2. 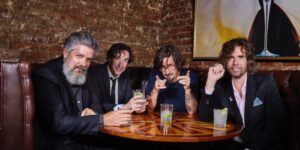 The Mountain Goats are, for all practical purposes, the endlessly clever and prolific John Darnielle and whatever cast of musicians he’s working with at the moment, which means the sound may change from project to project, but the overall tone and feel of Darnielle’s work remains remarkably consistent. Darnielle writes finely observed, impressionistic vignettes that blend a clear, realistic sense of detail with mildly surreal imaginings, giving his work a literary flavor that suits his status as a songwriter who is also a successful novelist. Darnielle’s early Mountain Goats releases were lo-fi, cassette-recorded efforts cut with a rotating lineup of musicians, such as 1995’s Nine Black Poppies and 2000’s The Coroner’s Gambit. By 2005’s The Sunset Tree, his recordings had become cleaner and less cluttered, but his character studies were just as vivid. As the Mountain Goats cohered into a stable lineup, with Darnielle joined by Peter Hughes, Matt Douglas, and Jon Wurster, they recorded tuneful, thematically unified albums such as Beat the Champ (2015) and Dark In Here (2021) that ranked with their finest work.

Taking the name from the song “Big Yellow Coat,” Darnielle first donned the Mountain Goats moniker in 1991 while working as a nurse in a California state hospital, and began releasing cassette-only albums for the label. Despite attracting a devoted underground following (or, possibly, because of it), the Mountain Goats continued to release songs in cassette form only for many years, virtually using tape hiss as an additional instrument. Besides innumerable compilation tracks, the Mountain Goats have also released many 7″ singles for over a dozen labels. Their full-length albums include Nine Black Poppies and Zopilote Machine (both released in 1995), Sweden (1996), Full Force Galesburg (1997), and Nothing for Juice (1997). Protein Source of the Future…NOW!, and Bitter Melon Farm (both 1999 releases) collected many early tape tracks and singles.

The Mountain Goats’ plans for touring in 2020 were scuttled due to the COVID-19 pandemic; in response, to help the group’s crew and accompanists recover some of their lost income, Darnielle wrote and released Songs for Pierre Chuvin in March 2020. Its ten songs were recorded using the same boombox he used for his early lo-fi releases, accompanying himself on acoustic guitar. The full-band edition of the Mountain Goats returned in October 2020 with Getting Into Knives, a sleek and tuneful effort which was recorded in Memphis shortly before the pandemic lockdown went into effect. Released in June 2021, Dark in Here would be the Mountain Goats’ third release in less than a year-and-a-half; recorded in Muscle Shoals, Alabama, it featured keyboard work from the legendary songwriter and producer . ~ Mark Deming & Steve Legget, Rovi