We are giving you another chance to WIN a pair of tickets to Hey Violet, Wrenn & Victoria Anthony @ Mission Theater on May 6. To win, comment below on this post why you’d like to attend. Winner will be drawn and emailed May 2. 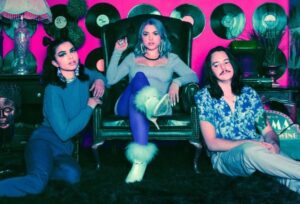 Over the past few years, Los Angeles based pop band Hey Violet (consisting of frontwoman Rena Lovelis, her sister Nia Lovelis on drums, and Casey Moreta on lead guitar) have steadily built an engaged fanbase with their powerful, immaculately crafted alt-pop songs. Their 2017 debut album From the Outside racked up critical praise, including accolades from The New York Times, which called it “one of the year’s best and most provocative pop albums” while Stereogum noted that it “has plenty of attitude thanks to Lovelis’ vocal and lyrical presence”.

Furthermore, NYLON declared, “I challenge you to find a debut album as explosive and technicolored as Hey Violet’s From the Outside…(the album) pulses with cheeky hooks and middle fingers to the status quo. Lead singer Rena Lovelis’ voice is arena-shaking. You’re in for one hell of a ride”.

The single Guys My Age was also named one of the Best Songs of 2016 by the New York Times, who called it “teen pop’s revenge: an urgent dark song about sexual rebellion” and one of the 20 Best Songs of 2016 by V Magazine. The band has racked over half a billion streams worldwide, sold out their North American headline tour, and performed on both The Late Late Show with James Corden and Late Night with Seth Meyers.

Most recently, Hey Violet released four tracks via Hi Or Hey Records/Capitol Records in 2019, their Problems EP in 2021, and they are poised to breakthrough with their upcoming EP (featuring the recently released single Party Girl) before the year is out.

All attendees must either: 1) be at least two weeks past receiving full COVID vaccination and show a vaccination card along with photo ID, or 2) show proof of negative PCR COVID test within 72 hours preceding the show, along with photo ID. Test must be medically administered. At-home tests not accepted. All ticketholders must wear face masks at all times except when eating or drinking.