We are giving away a pair of tickets to The Fixx @ Aladdin Theater on June 22. To win, comment below on this post why you’d like to attend. Winner will be drawn and emailed June 13. 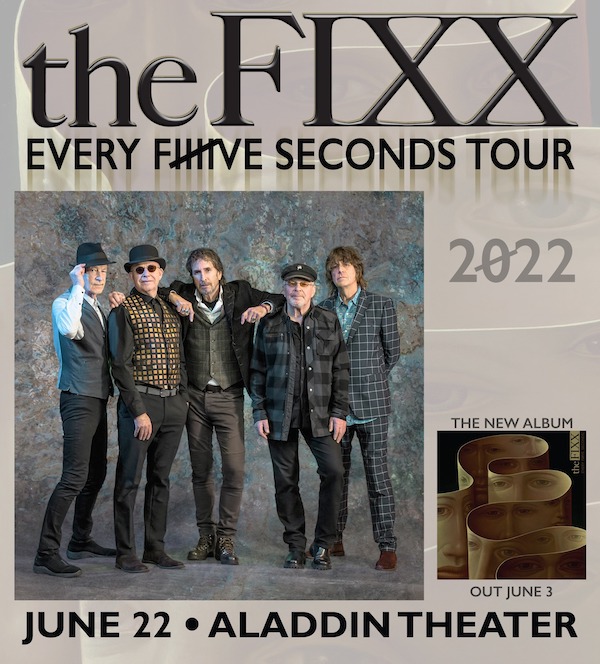 College friends Cy Curnin on vocals and Adam Woods on drums formed the group in London in 1979, initially calling themselves Portraits. The pair placed an ad for additional members, and recruited keyboardist Rupert Greenall, guitarist Tony McGrail and bassist Russell Mckenzie later to be replaced by Charlie Barrett. Portraits issued two singles for Ariola Records: “Little Women” (1979), and “Hazards In The Home” (1980).

The Fixx’s raised profile eventually led to the group being offered a contract by MCA Records. Worried about the potential drug-user implication of the band’s name, MCA insisted on a name change before signing them to the label. A compromise was reached as the band altered the spelling of their name to The Fixx, and a deal was duly inked.

After a full decade of touring and recording, the early part of the 1990’s saw the FIXX spending time with their families. It was during this decade, that the band’s record label released a number of compilations and greatest hits packages including “Missing Links” (1994), “Ultimate Collection: The Fixx” (1999), 20th Century Masters – The Millenium Collection: The Best Of The Fixx (2000), “Extended Versions” (2000); “Happy Landings and Lost Tracks” (2001); “Then And Now” (2002)

Most recently, the band has been hitting the road quite regularly and spending in between time working on various in studio projects. Cy Curnin has been active with social media giant Facebook and has made available dozens of new tracks on the platform he’s also released two new EP’s in the past year “Lockdown” and “Age Of Hearts”. Rupert Greenall is often in the recording studio and has released a number of side projects with various musicians. Jamie West-Oram has been spending his time working on creating music for film and television productions, and is also creating an all-new exciting musical project. Dan K. Brown occasionally appears live playing very different genres of music. Adam Woods is hard at work at the moment creating, tinkering and developing production elements for the next tour.