We are giving away a pair of tickets to The Charlatans UK, Ride @ Crystal Ballroom on February 15. To win, comment below on this post why you’d like to attend. Winner will be drawn and emailed February 6. 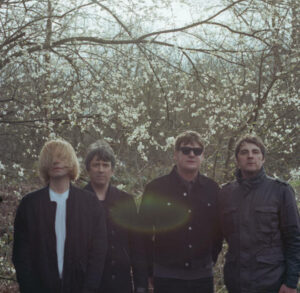 The Charlatans have reached a higher state of grace. Twenty-seven years since they first bagged a Number One album with ‘Some Friendly’, they’re still achieving fresh career highs, dreaming up new music that redraws their own map, increasingly assured of who they are as a band.

Their trajectory has few parallels in British rock, and it’s all set to continue with the release of ‘Different Days’, their brilliant 13th album, which finds them never more forward-looking, yet equally never more self-defining, or relevant. As Tim Burgess pointedly sings on one anthemically optimistic track called ‘There Will Be Chances’, “I laughed when I thought about the past, a place I love, but I can’t go back – the present’s where it’s at”.

Just listening to ‘Different Days’ makes you feel like a positive force has entered your life – and this, in a year when, as the title implies, the political outlook has shifted dramatically, bringing unforeseen prejudice, anxiety and division across the world. Explains Tim, “To us, the album represents an upbeat view of a world that might well be falling apart, in a time where you have to work out who your friends are, and gather them around you.”

The Charlatans’ own ever-spiralling success has itself been a triumph over adversity. After losing not one but two members (to a car crash, and a brain tumour) in their rollercoaster history, this most resilient outfit have somehow soldiered onto greater heights – a people’s band, whose embattled mortal passage through life also mirrors our own.

This time, the core surviving quartet of Burgess, bassist Martin Blunt, guitarist Mark Collins and keyboard player Tony Rogers, opened their doors to allow an enviable cast of friends to contribute to their latest work. Initially, this happened out of necessity: following the passing of founding drummer Jon Brookes in 2013, they have yet to appoint a permanent replacement. So, the first call went out to Pete Salisbury, the former Verve sticksman, who’d stepped in to help the band get up and running again on tour, through those difficult months of illness, loss and grieving.

Their last album, ‘Modern Nature’, was also made under that cloud, but had come out amazingly positively – and, indeed, modern. “It was a very soulful and cathartic record,” says Martin Blunt, The Charlatans’ founder and avatar, who has captained the band through all its ups and downs. “On previous albums, it had all got a bit fragmented, but I think we realised that what makes us, is all of us in the room together”.

Ride
One of the leading lights of the early 90’s shoegaze scene, Ride reformed in 2014, releasing their first album in over 20 years in 2017. ‘Weather Diaries’ was produced by Erol Alkan and greeted by a raft of critical and commercial acclaim, reaching number 11 in the UK album charts. It also saw Ride reunited with Wichita Recordings’ Dick Green and Mark Bowen, who worked with the band during their early years on Creation Records. The follow-up, ‘This Is Not A Safe Place,’ came together in a matter of weeks at the end of 2018 and start of 2019, the sound of a band embracing their new found creativity and rejuvenated dynamic. As well as working with Erol Alkan for a second time on production, their sixth record also saw Ride reunite with sound engineer Alan Moulder, who is on mixing duties for this fourth Ride record, following ‘Weather Diaries,’ ‘Going Blank Again’ and their 1990 seminal debut album ‘Nowhere’ (an album whose artwork is wonderfully echoed on the cover of ‘This Is Not A Safe Place’). ‘This Is Not A Safe Place’ charted at UK #7 on release in August 2019, the band’s highest chart position in 25 years.