We are giving you another chance to WIN a pair of tickets to Digable Planets @ Crystal Ballroom on December 31. To win, comment below on this post why you’d like to attend. Winner will be drawn and emailed December 26. 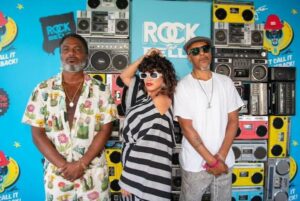 Digable Planets burst onto the music scene in 1993 with their Grammy-winning single, “Rebirth Of Slick (Cool Like Dat)”. Made up of Ishmael Butler (Butterfly), Craig (C Know/ Doodlebug) Irving, and Mary Ann (Ladybug Mecca) Vieira, the trio carved out a unique style of jazz-informed Hip Hop. Shortly after, Digable Planets followed up with their debut album, Reachin’ (A New Refutation of Time And Space), an ambitious offering that Pitchfork praised as “a world within a world, complete with its own language and monuments.”

Melding Jazz samples, and complex rhymes that touched on everything from the nuances of city life (“Where I’m From”) to abortion rights (“La Femme Fetal”), Reachin’ was a rich and vibrant artistic statement as well as a huge commercial success (RIAA certified gold).

Digable Planets immediately followed up with Blowout Comb, a bold and colorful meditation on Black liberation. While the album did not initially reach the immediate commercial successes of Reachin’, the album has aged beautifully, influencing future generations of Hip Hop heads, young Jazz musicians and Afrofuturists. The trio spent the 2000s establishing their own individual creative voices with Butler’s Cherrywine and Shabazz Palaces projects, Mecca’s work with BROOKZILL! and C Know leading Cee Knowledge & The Cosmic Funk Orchestra.

In 2015, the group embarked upon a string of wildly successful live shows and has been very active as a tight touring unit ever since. In 2017, they released Digable Planets Live, a live album that showcases many gems from the group’s catalog as well as the trio’s skill at rocking the crowd with a live band. A pioneering act that continues to cast a considerable influence, Digable Planets have left an indelible mark on music. Nearly 20 years after their debut, their music still shines and the group continues to bring their celebrated stage show to excited crowds around the world.