We are giving away a pair of tickets to each night of Lights, Camera, Factions Tour @ Pioneer Courthouse Square on September 17-18. To win, comment below on this post why you’d like to attend. Winner will be drawn and emailed September 12. 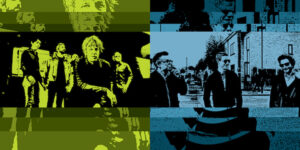 w/ Water From Your Eyes

Spoon’s tenth album, Lucifer on the Sofa, is the band’s purest rock ’n roll record to date. Texas-made, it is the first set of songs that the quintet has put to tape in its hometown of Austin in more than a decade. Written and recorded over the last two years–both in and out of lockdown–these songs mark a shift toward something louder, wilder, and more full-color.

From the detuned guitars anchoring “The Hardest Cut,”to the urgency of“Wild,” to the band’s blown-out cover of the Smog classic“Held,”Lucifer on the Sofa bottles the physical thrill of a band tearing up a packed room. It’s an album of intensity and intimacy, where the music’s harshest edges feel as vivid as the directions quietly murmured into the mic on the first-take.According to frontman Britt Daniel, “It’s the sound of classic rock as written by a guy who never did get Eric Clapton.

Halfway through the recording process, the pandemic hit. The studio shutdown, but Daniel continued writing. “There are songs I wrote last spring[of2020]thatI wouldn’t have come up with otherwise,”he says.“It was that first-of-its-kind moment.

When the band reconvened in October, Daniel had a new batch of songs, and a fresh sense of momentum. “It’s certainly something we didn’t take for granted, that feeling of being in a room with each other,” Daniel says. “That moment was a once in a lifetime kind of feeling.”

Interpol began in New York in 1997, when guitarist Daniel Kessler recruited bassist Carlos Dengler and singer/guitarist Paul Banks to form a band. In 2002, with Sam Fogarino on drums, the band signed to Matador records and released Turn On The Bright Lights, which made it to 10th position on NME’s list of 2002’s top releases and Pitchfork named it the year’s #1 album.

Over the next decade and a half Interpol would go on to wide critical and commercial acclaim, with five subsequent high charting records on the Billboard 200; earning rave reviews across the map from Rolling Stone to TIME; performing on late night television shows including the Late Late show with David Letterman and Conan and playing major festivals like Coachella and Glastonbury and headlining Mexico’s Corona Capital.

The band (Banks, Kessler and Fogarino) have just finished recording their latest studio album with legendary production duo Flood & Moulder, due for release through Matador Records in 2022.