We are giving away a pair of tickets to Reckless Kelly @ Mission Theater on July 29. To win, comment below on this post why you’d like to attend. Winner will be drawn and emailed July 25. 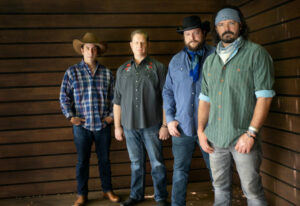 For nearly 25 years, Reckless Kelly has graced the musical landscape with a high-powered form of Americana, equally rooted in raw passion, refined musicianship, and gritty authenticity. With the dual release of two new albums—American Jackpot and American Girls—the Idaho-bred band presents a beautifully detailed portrait of their beloved country, turning their nuanced songwriting to its many glories and tragedies. While one batch of songs centers on slice-of-life storytelling and the other ex- plores the complexities of human connection, the collective body of work unfolds with a profound and often eye-opening attention to the subtleties of American life.

“I’ve always wanted to write an America-themed record, but not in some super-political or ‘rah rah rah’ sort of way,” says Willy Braun, who co-founded Reckless Kelly with his older brother Cody Braun and drummer Jay Nazz in 1996. “I wanted to tell stories of everyday life, and the kinds of things that nearly everybody experiences growing up in this country.”