We are giving away a pair of tickets to Railroad Earth @ Revolution Hall on January 15. To win, comment below on this post why you’d like to attend. Winner will be drawn and emailed January 9. 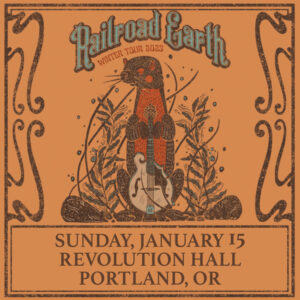 A brother leaves this world too soon. A trip down U.S. Highway 61 ends in a deluge of biblical proportions. A retreat to the Big Easy results in its own flood of inspiration. A new chapter begins. These moments and many more fade in and out of focus on Railroad Earth’s seventh full-length album, All For The Song.

“Perhaps, it represents the journey we’ve been on for twenty years as a band and as a family,” observes Carey.

“I will always remember these sessions as a time of healing and reflection,” adds Andrew.

“What threads the record together?” ponders Todd. “Nostalgia, sadness, and a lot of great moments to sing along to.”

For over two decades, Railroad Earth has captivated audiences with gleefully unpredictable live shows and eloquent and elevated studio output. The group introduced its signature sound on 2001’s The Black Bear Sessions. Between selling out hallowed venues such as Red Rocks Amphitheatre in Morrison, CO, they’ve launched the longstanding annual Hangtown Music Festival in Placerville, CA and Hillberry: The Harvest Moon Festival in Ozark, AR—both running for a decade-plus. Sought after by legends, the John Denver Estate tapped them to put lyrics penned by the late John Denver to music on the 2019 vinyl EP, Railroad Earth: The John Denver Letters. Beyond tallying tens of millions of streams, the collective have earned widespread critical acclaim from David Fricke of Rolling Stone, American Songwriter, Glide Magazine, and NPR who assured, “Well-versed in rambling around, as you might expect from a band named after a Jack Kerouac poem, the New Jersey-built jam-grass engine Railroad Earth has let no moss grow under its rustic wheels.”

In 2018, Railroad Earth bid farewell to founding member Andy Goessling who passed away from cancer. His shadow loomed over the process as the guys retreated to New Orleans for the first time to record.

“From the beginning, the vision was more than just the music,” states Todd. “We looked at this like a ‘destination’ record. Our past records were all made close to home or, in fact, at home. Andy’s passing was very much in the center of our thoughts and our hearts in the writing and recording of this album. Things were so shaken up that we thought it’d be a benefit to go away from all of the distractions and be together. In New Orleans, there is great food and there are great spirits to be shared. I’ll leave the music part of the equation for others to judge, but we surely succeeded in making the bonding part of the vision come to fruition!”

In the end, Railroad Earth brings listeners closer than ever on All For The Song.

“We want audiences to connect to the album,” Carey leaves off. “We hope they’re as moved by the music as we were making it.”