We are giving you another chance to WIN a pair of tickets to Gaytheist, Rhododendron, Common Girl @ Mission Theater on December 17. To win, comment below on this post why you’d like to attend. Winner will be drawn and emailed December 12. 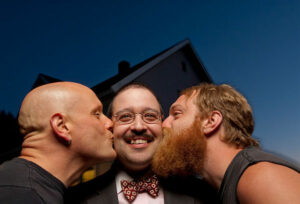 Gaytheist is a 3-piece noise rock trio based in Portland, Oregon.

Started playing out in 2011. They have released 6 albums, an EP, a live album and several splits mostly with Hex Records and Good to Die Records.

Songwriter/guitarist Jason Rivera and bassist Tim Hoff have been friends since high school. Nick Parks did a 6 month stint as High On Fire’s drummer just before Pandemic hit. Tim and Jason watched from afar with wonder and glee.

Rhododendron
Rhododendron are a difficult band to pin down. Hailing from Portland, OR, their music takes influence from post-hardcore, noise rock and math rock, while also dabbling in screamo, jazz fusion and sludge metal. Their music is dense, technical and mainly instrumental, relying on Gage Walker’s dissonant basslines, Ezra Chong’s noisy, effects-laden guitar and occasional shrieks, and Noah Mortola’s relentless drumming to get their point across. They formed in early 2019 and have two releases under their belt; in this time they have built a cult following in their local music circles, playing many shows with their contemporaries in Twistur, Dr/unk, Sea Moss, and many other notable bands.