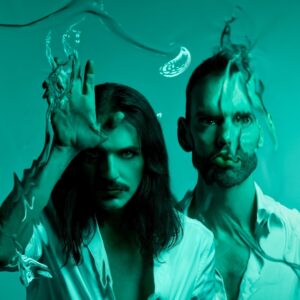 Placebo are on fire again. More than a quarter-century since vocalist-guitarist Brian Molko and bassist Stefan Olsdal started bashing around with broken guitars and toy instruments in Molko’s front room in Deptford, the core duo have dug very deep to spirit up their gobsmackingly urgent eighth long-player.

Called ‘Never Let Me Go’, it channels all their skill as songwriters and sound-makers into music that satisfies their near-brutal appetite for self-expression, but also seeks a furious relevance with the early-’20s world we all find ourselves in – crawling out of the pandemic into a landscape of intolerance, division, tech-saturation and imminent eco-catastrophe.

As such, the 2021-model Placebo are the diametric opposite of mid-career complacency, tackling both global issues and their own creative demands head on. The option to sit back and coast on former glories was there on a plate for them when they were last among us circa 2016-18.

A best-of collection entitled ‘A Place For Us To Dream’ had propelled them onto a world-wide greatest-hits tour – much of it in arenas and large outdoor venues – where they’d dust off mid-’90s arriviste bangers like Pure Morning, Nancy Boy, and Without You I’m Nothing, the single version of which David Bowie lent his vocals to. The marketing script probably stipulated that playing these songs every night would reconnect them with their most commercial instincts, but the experience quickly became nightmarish for them.

“I thought it all got a little bit too commercial, around that period – the retrospective period,” says Brian today, virtually spitting out those words with revulsion. “The whole enterprise was commercial, rather than artistic one, and I guess we reacted against that. I’m like, ‘Fuck this, the next record is gonna be about the pain of the world!’ The silent scream that is everywhere – that’s what interests me. Not this masturbatory, self-congratulatory two-year thing of, aren’t we amazing?”

Adds Stefan, “It was actually like this gruelling five-year tour which went from the last album being released [2013’s ‘Loud Like Love’] into the greatest hits. It kind of went on and on, and it was sucking the life out of me. I didn’t have a lot of enthusiasm left for the band, because I think I was just drained. The thought of doing it again filled me with dread.”nt;”>