We are giving away a pair of tickets to Paula Poundstone @ Revolution Hall on April 23. To win, comment below on this post why you’d like to attend. Winner will be drawn and emailed April 18. 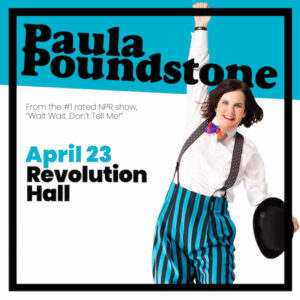 Paula Poundstone is known for her smart, observational humor and a spontaneous wit that has become the stuff of legend. Time magazine, in the March 2020 “Best of” issue, listed Paula’s HBO special, Cats, Cops and Stuff as one of The 5 Funniest Stand-Up Specials Ever. Paula can be heard weekly as the host of the comedy podcast, Nobody Listens to Paula Poundstone and as a regular panelist on NPR’s comedy news quiz, Wait Wait…Don’t Tell Me! Also an author, Paula’s second book, The Totally Unscientific Study Of The Search For Human Happiness (Algonquin) was one of eight semi-finalists for The Thurber Prize for American Humor, the highest recognition of the art of humor writing in the United States. The audio book was one of five finalists for the Audio Book of the Year AUDIE award.

Paula tours regularly, appearing on stage with a stool, a microphone and a can of Diet Pepsi. In a review for the Boston Globe of Paula’s performance, Nick Zaino III wrote: “Poundstone has one  of comedy’s most nimble and disarming comic imaginations. She improvises with the crowd like a jazz musician, swinging in unexpected directions without a plan, without a net –there’s a disarming ease in her craft, an immediate sense that she’s so quick on her feet you need never worry about the possibility of something going wrong.”

Paula was the first woman, in its then 73rd year, to perform standup and host the White House Correspondents’ Dinner, sharing the dais with the then President of the United States. She has starred in several HBO specials, including Paula Poundstone Goes to Harvard , marking the first time the University allowed its name to be used in the title of a television show. Her live coverage of the 1992 Democratic National convention to The Late Show with Jay Leno was so memorable that she ended up doing the Republican Convention and the Presidential Inaugural as well. In 1994, The 46th EMMY Awards followed with an invitation for Paula to do standup on the show, but she insisted on doing live behind-the-scenes coverage instead. The Producers were so dubious about her decision, unheard of at the time, they cut Paula to one spot. After she filed the first one, they asked her to do three more. Her performance was reviewed as “Career Making.” ’ Poundstone had set the standard for those to come.

Paula just released a new album, Paula Poundstone Goes to College (one night only). It is available wherever you get your comedy or music. She is the winner of an American Comedy Award for Best Female Standup Comic and has accumulated a list of other awards and accolades too long to mention. She continues to be recognized in innumerable lists, documentaries, and literary compendiums noting influential standup comedians of our time.