We are giving away a pair of tickets to Ace Frehley @ Aladdin Theater on April 28. To win, comment below on this post why you’d like to attend. Winner will be drawn and emailed April 25. 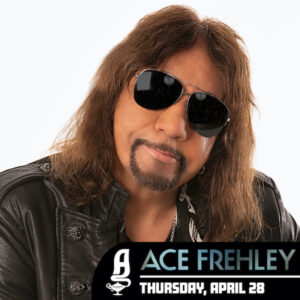 *Proof of COVID vaccination or negative COVID test required for entry. Policy subject to change and will be communicated ahead of the performance. Details here*

Here are a few things you probably know about Ace Frehley: He’s the original lead guitarist for KISS (which he co-founded in 1973). He was also their best—his song-within-the-song guitar solos are as much a part of KISS as the band’s seven-inch platform boots. And he’s always been the coolest member of KISS—rock ’n’ roll swagger, laid-back, mysterious—just ask Tom Morello of Rage Against The Machine, or Naoko Yamano of Shonen Knife, or Abbath of Immortal. Hell, even people who don’t like KISS still love Ace.

What you may not know is that Ace Frehley has not been a member of KISS since 2002, when he left his second tenure with the band (there’s a “spaceman” currently playing leads for the band, but it ain’t Ace). In his time away from KISS (1983-1996, and 2002-present), Frehley has put together the most successful solo career of any member—current or former.

And Ace is on a roll. He’s ready to embark on his next musical journey with Spaceman, his third solo outing in four years. Of all Ace’s post-KISS recorded output, Spaceman might be the closest link to his widely acclaimed 1978 solo record, both in spirit and execution. First off, Frehley played all of the guitar parts on Spaceman , as well as bass on all but two songs. Longtime drummer Anton Fig, whose friendship with Ace began in that 1978 record, also appears on “Off My Back” and “Pursuit of Rock and Roll” (longtime collaborators Scot Coogan and Matt Starr also play drums on Spaceman ).

Along with writing and recording new material, Ace has also been tirelessly hitting the road, playing festivals, as well as dates stateside and in Australia and Japan (including dates with the mighty Alice Cooper). As always, Ace is traveling at an altitude us mere mortals will never understand—a life lived to the fullest, and one that has defied… well, everything. That said, if you ever see the Space Ace in the cosmos, there’s only one proper reaction: “Hey look, it’s rock ’n’ roll!”