We are giving away a pair of tickets to Patrick Watson @ Aladdin Theater on October 15. To win, comment below on this post why you’d like to attend. Winner will be drawn and emailed October 10. 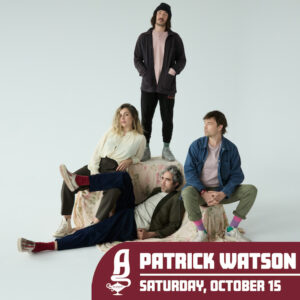 Patrick says he became a singer by accident. He thought he would compose scores for others to play, which seems like an odd thing to say because he is so clearly sprinkled with the pixie dust that causes a person to be transfixing on stage. And it’s now hard to imagine Montreal without the soundtrack of his songs.

Patrick likes to hang on to people. He met his first guitar player Simon Angell playing guitar on the small streets of Hudson. In his first jazz class at college he walked in and Robbie Kuster and Mishka Stein were both sitting there. It was as though they were all waiting for each other. They would play together for the next twenty years.

While they were working on his first album, the band lived in an abandoned church. They were kicked out for ringing the church bells when homeless people came in to be married, waking all the neighbours up in the middle of the night, in a misguided attempt to let them know love existed.

They opened up for James Brown where they learned to manage a large crowd. Every day before a concert James Brown and his team would hold hands and pray the show would be amazing. This taught the band that being on stage is a humbling honor and a music show is where people come to have a mystical experience. In the end, it was not so different than when he sang in church as a boy.

While writing this new album, the drummer Robbie left, Patrick and his partner separated, and his mother passed away. Much of this album is about having a wave knock you over when you realize that everything you have in life can be wiped away in a moment. He brought a notebook underneath the waves and composed tunes about melancholy while listening to the lonely hymns of mermaids. And the songs are about how sometimes you have to sing a love song to yourself when no one else will. Melody Noir is about writing a song to the hole inside us all.

Some of the songs, including Turn out the Lights and Look at You, are about falling in love again and learning how to be intimate in a new way. And how surprizing it is that, although life can change, it can turn out to be better in so many ways than you could ever have imagined. And, ultimately, the album is about rebuilding your life from scratch.

The beginning artist’s craft is so intuitive and odd, drawing from a trunk of recipes for happiness and hope. They begin with an idea that the world is good and things and love will work out. The mature artist creates from a place of melancholy and understanding of foibles and accepting a story that has already been written. It’s the difference between singing a solo at a stranger’s grave as a child and singing one at your own mother’s funeral.

It’s the same magical and sweet Patrick Watson on this album, but each of the feelings are deeper and dive down to stranger places, where even happiness seems impossible to bear. So the album moves from a dark place of loss to one of hope and magic and new love. The way you thought life was going to work out, but never does. Then it sometimes turns out to be more beautiful and surprising once it is broken.