We are giving away a pair of tickets to Paolo Angeli @ The Old Church Concert Hall on October 16. To win, comment below on this post why you’d like to attend. Winner will be drawn and emailed October 10. 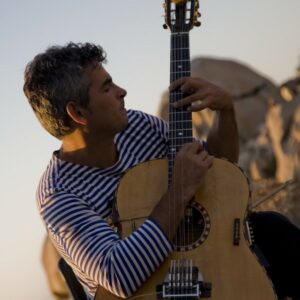 Paolo Angeli, Guitar and Vocals
Born in 1970 in an extremely stimulating musical environment, Paolo Angeli grew up in Palau, a small port in northern Sardinia that looks out on the 12 islands of the Maddalena archipelago, a rugged scenic area of turquoise lagoons, national parks, and pristine beaches. He started to play guitar when he was nine. The guitar and the voice of his father (his first mentor), the rock bands of the village, his experience at concerts in village squares, and carnival evenings all pointed him in a direction that eschewed stylistic barriers in music. In 1989, he moved to Bologna and started to play with various contemporary music ensembles, practicing collective composition and improvisation, breaking down the borders between musical genres, and playing in the main European festivals of innovative music. In 1993, he met Giovanni Scanu, a legendary Sardinian guitar player who died at the age of 95. Scanu taught him the forms and the components of the canto a chitarra gallurese e logudorese, old songs in the Sardinian dialects of Gallurese and Logudorese, traditionally accompanied by guitar.

From this clash between avant-garde and popular tradition came Angeli’s Sardinian prepared-guitar: an instrument with 18 strings—a hybrid between baritone guitar, cello, and drums, replete with hammers, pedals, and variable pitch propellers. Since 1997, he has played concerts with his modified guitar all over the world at some of the most important festivals and theaters of Europe, Japan, Australia, North and South America, Russia, and Africa. He has also recorded more than 50 CDs. He has collaborated with Pat Metheny (who uses Angeli’s guitar in Orchestrion), Fred Frith, Hamid Drake, Iva Bittová, Butch Morris, Ned Rothenberg, Jon Rose, Derek Gripper, Antonello Salis, Evan Parker, Takumi Fukushima, Louis Sclavis, and Paolo Fresu, among others.
Angeli has a degree in ethnomusicology and has digitalized the Archivio Mario Cervo, the most important collection of Sardinian records and traditional music. As a researcher, he has published Canto in Re, a volume of historical analysis of the cantu a chittera. With Nanni Angeli, he is the artistic director of Isole che parlano, an international arts festival suspended between innovation and tradition that has taken place in Palau since 1996.