We are giving away a pair of tickets to Kristen Grainger & True North: “Ghost Tattoo” B-Day Show w/Mark Lemhouse on October 2. To win, comment on this post why you’d like to attend. Winner will be drawn and emailed September 27. 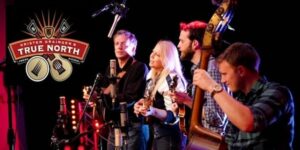 The band’s 2020 release, Ghost Tattoo, was named one of the Top 20 Albums of 2020 by Folk Alley’s Listeners Choice, hitting #1 on folk radio charts for both albums and singles. According to Folk Alliance International, Ghost Tattoo was the second most-aired album on folk radio in 2020.

A songwriter whose star is rising, Kristen was named, alongside Brandi Carlile and Dolly Parton, one of the Women Who Wrote Our 2020 Soundtrack by The Bluegrass Situation.

She won the 2020 USA Songwriting Competition (folk), and she has won or been a finalist in some of the nation’s most prestigious songwriting contests, including Telluride Bluegrass Festival (CO), Wildflower Festival (TX), Merlefest (NC), and Kerrville Folk Festival (TX).

With deep roots in Oregon and Washington, the quartet tours nationally and internationally — when not curtailed by a global pandemic.