We are giving away a pair of tickets to Mudhoney @ Revolution Hall  on April 29. To win, comment below on this post why you’d like to attend. Winner will be drawn and emailed April 25. 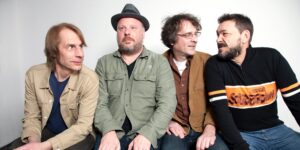 Ultimately, Every Good Boy Deserves Fudge epitomised the very best of Mudhoney: here was a band reconnecting with its purest instincts, and in the process reinventing itself. This 30th anniversary edition, remastered by Bob Weston at Chicago Mastering Service, stands as testimony to the intense creative surge that drove them during this period. The album sessions yielded a clutch of material that would subsequently appear on B-sides – notably the stinging “Ounce Of Deception,” easily worth a place on the main record – or were scattered on various compilations and split-singles. It’s great to have these gathered together here. There’s also: the non-album single “You’re Gone” plus its flipside, the early version of “Thorn,” recorded in March 1990 during the band’s legendary first Australian tour; an unreleased version of “Paperback Life,” the Billy Childish tribute that possibly toppled into wholesale larceny; and a new Johnny Sangster mix of “Overblown,” Mudhoney’s contribution to the 1992 Singles movie soundtrack.

The sweetest gravy for keen Mudhoney anthropologists, meanwhile, is the Music Source session in its entirety. Only one of these tracks has been released before (“Something So Clear,” on a Reflex magazine flexidisc), but now all five are available newly mixed by Jack Endino, offering a fascinating glimpse of an alternate historical path. Or, as Dan Peters puts it: “These are the 24-track demos for our 8-track album.”

By going back to basics with Every Good Boy Deserves Fudge, Mudhoney flipped conventional wisdom. Not for the first time – or the last – they would be vindicated. A month after release in July 1991, the album entered the UK album chart at Number 34 (five weeks later, Nirvana’s Nevermind entered at 36) and went on to sell 75,000 copies worldwide. A more meaningful measure of success, however, lay in its revitalisation of the band, casting a touchstone for the future. This album is a major chapter in Mudhoney’s ongoing story, the moral of which has to be: when in doubt, fudge it.