We are giving away a pair of tickets to Hanna Haas Album Release w/The Hackles, Jeffrey Martin @ The Old Church Concert Hall on April 29. To win, comment below on this post why you’d like to attend. Winner will be drawn and emailed April 25. 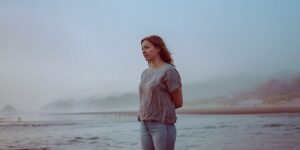 Hanna Haas is a songwriter drawn to the dance of light and dark. Currently based in Portland Oregon, she has come to call the entire West Coast her home. Hanna describes her music as “contemplative folk,” identifying with artists Nick Drake, Joni Mitchell, and Feist for their alternate tunings and mesmerizing melodies. Inspired by environments in which she has inhabited, Hanna sings of the dramatic landscape of Big Sur, the California sun, and the vast and open Pacific Northwest sky. Hanna loves to engage her audiences in sweet story-telling and laughter, leaving her audience in a state of heart-felt introspection.

Hanna has played countless shows in Portland, OR and has become a part of the close knit community of West Coast artists. She has opened for artists such as John Craigie, Still Woozy, Juliana Barwick and others. Hanna has been working on her debut album “To Her, the Sea” and plans to release it in Spring 2022.