We are giving away a pair of tickets to Marlon Williams @ Aladdin Theater on September 29. To win, comment below on this post why you’d like to attend. Winner will be drawn and emailed September 26. 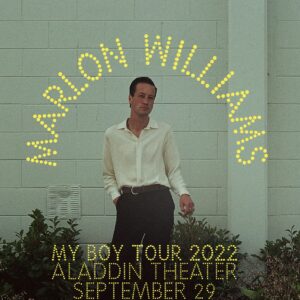 A versatile singer/songwriter based out of New Zealand, Marlon Williams crafts narrative-driven, atmospheric indie folk songs that draw from a deep — and often dark — well of country, soul, bluegrass, and pop. Known for his commanding voice, which evokes artists like Richard Hawley, Porter Wagoner, Chris Isaak, and Roy Orbison, Williams emerged in 2015 with a sound that hewed closer to brooding folk and bluegrass. He shifted almost exclusively to soulful retro-pop on his chart-topping 2018 breakup album Make Way for Love.

Born in the coastal town of Lyttelton and raised in a Maori household on an eclectic musical diet that included the Beatles, PJ Harvey, Townes Van Zandt, Mozart, Gram Parsons, Echo & the Bunnymen, Elvis, and the Band, Williams studied classical music at the University of Canterbury. However, the rigidity of the curriculum proved too restricting, prompting Williams to look elsewhere for a way to flex his creative muscles. After honing his skills at bars and pubs with his band the Unfaithful Ways, who became a notable draw and issued a pair of well-received records, Williams relocated to Australia to take advantage of the fertile Melbourne music scene — the brutal earthquake that rocked Christchurch in 2011 also played a part in his decision to change locales. In 2012 he released Sad But True, Vol. 1, the first of three award-winning collaborations with popular Kiwi country singer Delaney Davidson — Vol. 2 and Vol. 3 were issued in 2013 and 2014, respectively.

Williams’ eponymous solo debut dropped in 2015 and debuted at number ten on the New Zealand albums chart. The critically acclaimed LP was released internationally the following year on Dead Oceans Records. In early February 2018, Williams issued the single “Come to Me” in anticipation of the release of his sophomore full-length effort, Make Way for Love, which arrived later that month. The LP dealt with the aftermath of his breakup with fellow Kiwi singer/songwriter Aldous Harding, and soared straight to the top of the New Zealand albums chart. The following year saw Williams issue his first concert album, Live at Auckland Town Hall. He found kindred spirits in the Canadian contemporary folk duo Kacy & Clayton, and teamed up with them to record a collaborative album, 2020’s Plastic Bouquet. ~ James Christopher Monger, Rovi