We are giving away a pair of tickets to Lily Wecks Single Release w/Presidio Music, Rain Ezra @ The Old Church Concert Hall on June 3. To win, comment below on this post why you’d like to attend. Winner will be drawn and emailed May 31. 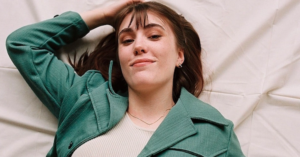 Lily Wecks is a Portland based indie pop artist with a background in classical and jazz piano. On June 3rd she will be beginning the launch of her debut album, with the release of her first single Lightning Bug. Lily will be joined by West coast musicians, Rain Ezra and Presidio, for an evening of celebration, healing, and arrival.

Lily Wecks is a 22 year old indie pop artist with a background in classical and jazz piano. With heartfelt vocals and intentional lyrics she tells stories of love, grief, and healing. Since childhood, Lily has been writing music to try and understand the world better. Currently, she is recording her debut album, set to be released this summer. Her work is largely motivated by her experience growing up as a bisexual woman in an evangelical environment, and the healing she has undertaken over the last few years, and she hopes to use her music to build community.

Rainezra, also known as Rain Pollock, is a singer/songwriter and producer with R&B influences. Rain has performed all over the Northern Oregon area as well as places in her home towns, Modesto and Santa Cruz, California. Starting off singing original songs at many school graduations and weddings, Rain worked her way to be a finalist in Portland Teen Idol getting opportunities to perform original content in front of large audiences. After turning 21, Rain has performed at many big name venues such as Paris Theater, Jack London, Al’s Den, Star Theater, as well as many wineries, bars and restaurants across Oregon and California. Rain produced her whole album “Possibilities” on her own in Ableton while studying at Portland Community College earning her Certificate in Music and Sonic Arts. Rain was able to get her vocals recorded, mixed and mastered with the help of ”.WavMedia,” a group of members of a local collective of talented artists and engineers. “Possibilities” is now available on all streaming platforms.