We are giving away a pair of tickets to Lee Fields Presents The Sentimental Fool Tour @ Aladdin Theater on October 29. To win, comment below on this post why you’d like to attend. Winner will be drawn and emailed October 24. 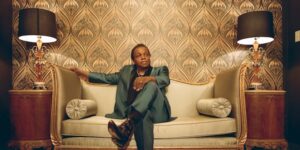 Lee Fields is arguably the greatest soul singer alive today. In an age when the shelf life of an artist largely depends on posturing and trends, he has proven to be an unassailable force of nature. His prolific, decade-spanning career continues to reign supreme on the modern soul scene. In addition to twenty albums and over forty singles, he has taken the stage at almost every major festival and relevant venue on the planet, including Coachella, Bonnaroo, Newport Folk, Roskilde, Outside Lands, Rock en Seine, Carnegie Hall, the Olympia in Paris, and the Paradiso in Amsterdam. His body of work continues to garner the attention of pop artists and producers via samples by hip hop heavyweights: J. Cole, Travis Scott, Rick Ross, A$ap Rocky. This October, Lee releases his 21st full-length, Sentimental Fool — a soulful, bluesy return to his rhythm & blues roots.

From the very first time he saw James Brown perform, on the T.A.M.I. Show in 1964, Lee Fields knew he was going to be a singer. Born Elmer Lee Fields to Emma Jean Fields and John Fields in Wilson, North Carolina in 1950, he was still a teenager in the Summer of 1967 when his mother reluctantly gave him her last twenty dollars to hop a bus north to follow his dreams. He turned up unannounced at the Brooklyn apartment of his friend Fred Williams who had told him to “come up and stay anytime.” Williams happened to be getting married the very next day and was in the process of moving out. At the wedding, Lee met Lonnie Smith who took him around to some clubs later that night. When he stepped up to sing a James Brown tune with Little Love and the Lovelights at the 521 Club on Nostrand Ave. and Fulton St., people started throwing money. It was enough for him to buy a nice dinner and cover the first three weeks rent at the apartment that used to be Williams’s. Lee was on his way.

In 2022, Lee reunited with Daptone Records and producer Gabriel Roth (AKA Bosco Mann) on the 25th anniversary of their first meeting to record Sentimental Fool, a deep, blues-tinged, wholly-conceived soul album. “I wanted to cut a different kind of record and really give Lee room to sing,” explains Mann. “We took our time and got painfully deep into every one of these tunes, stripping them down to pure feeling — no effort spared, no empty gestures remaining. Lee might be the greatest singer alive and I don’t think he’s ever sung better than on these sessions.” From his first line to his final plaintive lyric, the beauty, power, and raw humanity of Lee’s voice is on full display here; the culmination of an astounding career that has seemed to defy gravity, rising to only greater and greater heights.

“With Gabe’s efforts I feel like this album depicts me as the full character that I am. I’m all about emotions. This album allowed me to show what I’m capable of doing. Not to say that my vocal ability goes beyond others, but I’m able to figure out the math to get the feeling you’re looking for. I’m not trying to outdo any singer, but I can interpret the feeling. I can make someone cry if I want to. It’s always the challenge of trying to make something deeper. On this record I go deeper than I’ve ever gone.” — Lee Fields