We are giving away a pair of tickets to Larry Fuller Trio w/Special Guest Dan Faehnle (Guitarist of Pink Martini) @ The Old Church Concert Hall on November 12. To win, comment below on this post why you’d like to attend. Winner will be drawn and emailed November 7. 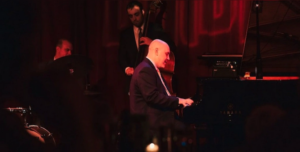 Originally from Toledo, OH and now based out of New York City, Larry Fuller is an internationally acclaimed jazz pianist known to “swing like a beast!” He is a Yamaha-endorsed Artist.

Early in his career, Fuller’s undeniable talent earned him the position of musical director and pianist for vocalist Ernestine Anderson, pianist for drummer Jeff Hamilton’s Trio, and final pianist in legendary bassist Ray Brown’s Trio. He also toured and recorded with the guitarist-vocalist John Pizzarelli’s Quartet.

Harnessing his extraordinary experience – Larry Fuller now leads The Larry Fuller Trio. He presents a musical program rarely experienced live today, consistently praised for his emotive, swinging style, monster technique, and program versatility. From bop, to stride, to swing, to blues, Fuller’s performance at The Old Church is not to be missed!