We are giving away a pair of tickets to Robben Ford @ Aladdin Theater on July 13. To win, comment below on this post why you’d like to attend. Winner will be drawn and emailed July 5. 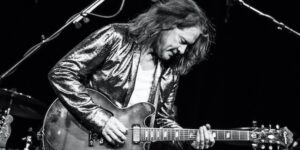 Born in 1951 in Woodlake, California, and raised in Ukiah, Robben was the third of four sons in a musical family. His father Charles was a country and western singer and guitarist before entering the army and marrying Kathryn, who played piano and had a lovely singing voice. Robben’s first chosen instrument was the saxophone, which he began to play at age ten and continued to play into his early twenties. He began to teach himself guitar at age thirteen upon hearing the two guitarists from The Paul Butterfield Blues Band, Michael Bloomfield and Elvin Bishop. In the late 1960’s, Ford frequented the Fillmore and Winterland auditoriums in San Francisco to see Jimi Hendrix, Eric Clapton, Cream, Led Zeppelin, Albert King, B.B. King and all of the progenitors of blues. “It was an incredible time for electric guitar,” Robben recalls.

On his interest in jazz, Robben says,” I fell in love with the sax-playing of Paul Desmond and The Dave Brubeck Quartet, and before long found Ornette Coleman, Archie Shepp, Yusef Lateef, Roland Kirk, John Coltrane, Wayne Shorter, and of course, Miles Davis.” These influences have stayed with Robben, playing a large part in his particular blend of jazz and blues that define him as a guitarist and allow him to play in a wide variety of settings.