We are giving away a pair of tickets to Four-Eyed Horsemen Featuring MC Lars @ Lola’s Room on September 5. To win, comment on this post why you’d like to attend. Winner will be drawn and emailed September 2. 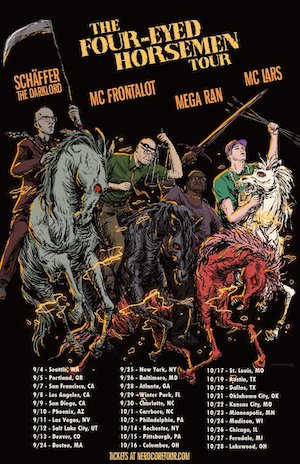 MC Lars is the creator of post-punk laptop rap and lit-hop, which he has extended and powered into a fusion of rap, punk, rock, ska, pop and other genres. He is post-modern — combining his music with powerful and present lyrics, and packing concert venues with raps about everything from the iGeneration to Guitar Hero to Edgar Allen Poe to Game of Thrones, the Simpsons and cyberbullying. He speaks to and for people of all ages, lifestyles, and perspectives, and is a story-teller, covering love, life, loss, confusion, and hope. He does so with energy and wit, joined with a strong sense of humor and perspective. He tours in the US, the UK and the rest of Europe, Australia, New Zealand, and Japan.

He is a DIY Indie artist and a number of his albums have been funded by his fans through Kickstarter, at record-breaking levels. His work (albums, EPs, and music videos) includes collabs with a wide range of musicians – among them, “Weird Al” Yankovic, KRS-One, Sage Francis, Watsky, Mega Ran, Jaret Reddick of Bowling for Soup, Wheatus, the Matches, Ash Wednesday of Hand Job Academy, Kool Keith, Spose, MC Chris, MC Frontalot, YT Cracker, E 40, Schäffer the Dark Lord, Beefy, and K.Flay.

He is an active and successful player in the music industry’s new media digital world; and has a strong presence with his fans through Patreon, Bandcamp, iTunes, Spotify, YouTube, SoundCloud, and his own label, Horris Records. He is wired and connected, worldwide, through his active social media presence, his website, and his online store at Hello Merch.

With more than a decade of professional music-making behind him, Mega Ran was able to not just weather and survive the Covid-19 pandemic, but the celebrated rapper was able to actually thrive in it. When March 2020 forced an unprecedented career pivot from focusing on live shows and recorded music, to focus on digital content and fan interaction Mega Ran seamlessly transformed his style to adapt to the times. From his wildly successful run with his own web show Random House Studios to the monthly online only 4 Eyed Horsemen Specials, to releasing his first book, and doubling down on his podcast Mega Ran has spent the pandemic innovating his approach while keeping an eye on the horizon for his opportunity to get back in front of his diehard fans all of the world.

Schaffer the Darklord (or STD) is a New York City-based rapper, drummer and comedian with material best-suited for nerdy and/or hedonistic audiences. With manic energy fueling a cartoonishly commanding stage presence, STD skewers such topics as substance abuse, sexual compulsion, urban anxiety and obsessive cat-enthusiasts. Imagine a Frankenstein-esque monster assembled from equal parts Bill Hicks, Adam Yauch, Joey Ramone and Prince, stitched together inside the shell of a maniacal heavy metal ex-patriot. STD has released eight albums (2004’s “Meet My Maker,” 2007’s “Mark of the Beast,” 2009’s “Manslaughterer,” 2012’s “Junk Drawer,” 2013’s “Sick Passenger,” 2015’s “Sex Rhymes,” 2017’s “Junk Drawer Vol. 2” and 2018’s “The Department of Darkness”) and toured the country with such artists as MC Chris, MC Frontalot, Mega Ran and MC Lars. When he’s not on the road, he produces and >co-hosts The Epic Piecast on the Nerdy Show Podcast Network. STD continues to write, record and perform with great frequency and has no intention of stopping until his masochistic rock-n-roll lifestyle destroys him.

COVID Policy: All attendees must be fully vaccinated for COVID (proof is required via vaccination card or photo of vaccine card on phone), or show proof of a negative PCR COVID test within 48 hours preceding the show. Proof in all cases must be accompanied by photo ID. Full COVID policy here.