We are giving away a pair of tickets to 101 Extraordinarily Awful & Truly Terrible Ways to Die on October 28. To win, comment below on this post why you’d like to attend. Winner will be drawn and emailed October 27. 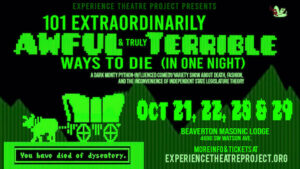 Part improv, part side show, this Monty Python-like dark comedy will have you cheering “Death! Death! Death!” more than once.

A dark sketch comedy show about death, dying, and laughable but true stories of dreadful ways people have kicked the bucket, sometimes literally. Sometimes a game show, sometimes a variety show, this audience-driven show features live action comedy, hilarious video clips and skits, music, and much more. An ensemble cast performs shameless reenactments of the absolute most cringy ways people have met their maker, and the Grim Reaper himself will keep score to make sure we’re honest about bringing you 101 deaths in one night. “The Judge” (is he an angel or a devil?) will determine whether deaths were truly terrible or downright unacceptable.

This is an over 21 event featuring themed cocktails, beer, wine, soft drinks, and light hors d’oeuvres for purchase during the show.