We are giving away a pair of tickets to David Torn + Corzi și Arcuri @ The Old Church on October 22. To win, comment below on this post why you’d like to attend. Winner will be drawn and emailed October 17. 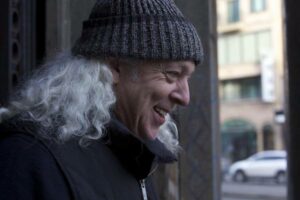 “His work is very spiritual, and has an ephemeral quality that I adore.” — David Bowie

“I said to myself, ‘What IS this SPLATTERCELL?’, and BOOM!, within a minute I was just sitting there, riveted. This guy’s twisted, and I WANT twisted: Torn saved the tracks from the bin! He’s ‘The One’.” — Jeff Beck

David will first play a solo guitar set and then have a directed mini orchestra of these wonderful Portland-based improvisers/songwriters and composers.

David Torn is a guitarist, composer, recording artist, producer/mixer. (He sometimes appears as “Splattercell”) With a longtime avid & active interest in hand-made electronic music, he’s been known for a textural integration of live electronics into electric guitar performance, regardless of “genre”….. and the resulting manipulations of sound.

His interest in stories led him to broaden his already idiosyncratically pan-idiomatic sensibilities into films, into film-music. He’s consulted on design-function of more live-looping devices than seems reasonable, as well as on other musical instruments, both electronic & otherwise.

His own film-scores include Lars and The Real Girl, Friday Night Lights, Everything Must Go, That Awkward Moment, Saint John of Las Vegas, The Order (Grammy nom), The Light of the Moon, Jesus Henry Christ, waterandbirds, Tonight We Eat Flowers, etc.

His textural work continues to populate many major game-scores.