We are giving away a pair of tickets to An Evening with Steinway Pianist George Ko @ The Old Church Concert Hall on March 25. To win, comment below on this post why you’d like to attend. Winner will be drawn and emailed March 21. 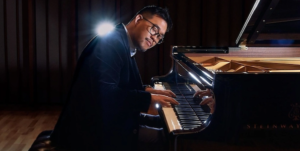 Known for his alluring sound, expressivity, and eloquence at the keyboard, pianist/composer George Ko has appeared on stages worldwide, including nine appearances at Carnegie Hall. His performances have been broadcast on ABC, CBC and featured in music festivals in Italy, Germany, Luxembourg, and China. As a recording artist, his piano compositions and interpretations of Chopin have appeared on films at the Tribeca Film Festival, Sundance Film Festival, and Netflix. His current discography encapsulates his improvisational technique blending classical virtuosity, jazz flexibility, and film soundscapes.

As a composer, George developed his artistry at Harvard University, where he received his bachelor’s in music with honors. There, George premiered his first composition with the Grammy award-winning Parker Quartet. Recently, George has been an active film composer. In collaboration with hip-hop producer Dan the Automator, George composed the piano score for the Salt-N-Pepa Biopic on Lifetime in 2021. For his original, “Nectarines,” George received the Gold Prize for Instrumental from the WAM Awards amongst a pool of 5000 composers.

George is also a successful entrepreneur, having founded several companies and non-profits. He received the CES Innovation Award in Robotics in 2019 and the Harvard Gov 2.0 Award for innovation in politics. George was also the co-founder of Giant Robot Media, an Asian-American digital magazine that discovered groundbreaking creatives.

George has given inaugural concerts for the Museum of Fine Arts in Boston, the Bowers Museum, and the Fogg Museum. He also performed at the request of President Joe Biden, Governor Arnold Schwarzenegger, and Senator Barbara Boxer. In recognition of his artistic talent, Harvard University awarded George the David McCord Prize. He is also a 5-time laureate of the Bradshaw and Buono International Piano Competition. George was also the keynote artist for TEDx’s 2020 global sustainability conference, “COUNTDOWN,” co-hosted by Happily.

George currently resides in Los Angeles, California. His music is available on all streaming platforms and the Sonder House label. George is also a member of the Society of Composers and Lyricists and ASCAP. George is a Young Steinway Artist.