We are giving you another chance to WIN a pair of tickets to Alexandra Savior @ Mission Theater on May 14. To win, comment below on this post why you’d like to attend. Winner will be drawn and emailed May 9. 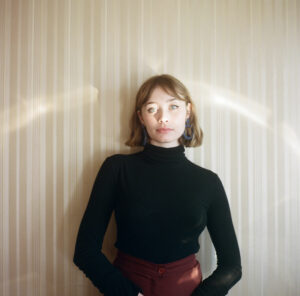 With a voice that channels the ghosts of smoky fifties jazz haunts, lucid and literary lyricism worthy of J.D. Salinger, and wondrous youth-in-revolt abandon, Alexandra Savior will tell you she makes, “Sassy impolite spaghetti western music.”

That’s certainly an apropos hint of what’s to come from her in 2016. The twists and turns that led to her proper introduction prove just as intriguing as the music itself does.

The journey starts outside of Portland, OR in Vancouver, WA. Alexandra’s mother was diagnosed with cervical cancer during pregnancy, but mom and daughter miraculously survived. “Apparently, my baby body blocked the cancer,” she says. “That’s why my father named me Savior.”

Escaping from high school bullying, she collected vinyl by The Velvet Underground & Nico, Nina Simone, Billie Holliday, and more, quietly honing her voice along the way. Upon graduating, she found herself across the pond writing music in England. Some of those early demos made their way into the hands of Columbia Records who offered the budding songstress a deal. Inspired by his work on the Submarine Soundtrack, she wanted to play her tunes for Alex Turner of Arctic Monkeys. Ten minutes into their first meeting, the duo began writing and fashioning an inimitable sound.

That sound lightly reared its head into pop culture throughout 2015 as her song “Risk” figured prominently in HBO’s True Detective, while the likes of NME extolled her debut performances in New York and Los Angeles, clamoring to hear and know more. Alexandra decided to let the music do the talking, envisioning characters who mirrored the wonderfully vapid Los Angeles landscape around her as she recorded in the “haunted” VOX Studios.

“I stay a bit stoic with my personal emotions,” she admits. “I portrayed things I was going through, but I didn’t say them out loud. When I first moved to L.A., I was observing a world I’d only heard about — but it was true. I felt like I had to figure out who I was in a year, and I wrote about that struggle. I created a fantasy.”

“Shades” introduces her with a shaky tambourine, rustling guitar hum, buzzing synths, and her croon, “I kinda wish that it was New Year’s Day on a vacant street. I cast a long ass shadow when you’re looking for your shade.”

All attendees must be fully vaccinated for COVID (proof is required via vaccination card or photo of vaccine card on phone), or show proof of a negative PCR COVID test within 72 hours preceding the show. Proof in all cases must be accompanied by photo ID. Full COVID policy here.