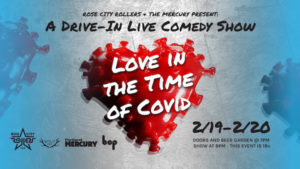 Join Rose City Rollers, Portland Mercury and SheBop for this once-in-a-century comedy event featuring 5 of Portland’s top comics as they turn the pain of pandemic love, dating, and everything in between into tears of joy.

Your Car Pass gets you and your pod into the event – PLUS 2 cans of Wyld CBD sparking water and a 2 Pack of Wyld CBD gummies! Bring a minivan or a mini cooper and cozy up with your huddle for the first live comedy show in town since who can remember when?

***This is a fundraising event to support the Rose City Rollers, local comedians, The Mercury and Oaks Amusement Park.

Service will start in the beer garden at 7pm. Food Service by Killer Burger.