We are giving away a pair of tickets to Broke Gravy and Friends @ Clinton Street Theater on September 10. To win, comment below on this post why you’d like to attend. Winner will be drawn and emailed September 6. 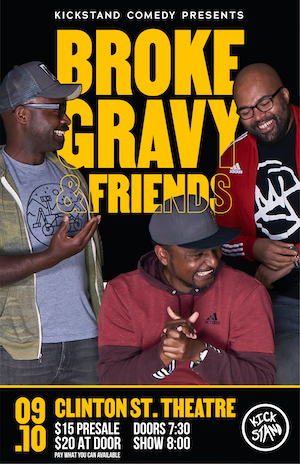 Fresh off performing for more than 7,000 hysterical Moda Center spectators at TEDxPortland, Portland comedy trio Broke Gravy is back, and they’re bringing a few of their friends for a night of improv, storytelling, prizes, and more!

They’ll be joined by three amazing BIPOC storytellers—Flynne Olivarez, Monica Dailey, and Mary C. Parker—telling tales about Summertime Magic. Then they’ll use those stories as inspiration for their special flavor of improv comedy. Guaranteed to be something you’ve never seen before and will never see again.

Plus, a portion of every ticket will go towards Kickstand Comedy’s BIPOC Improv Program.

**Kickstand Comedy strives to eliminate barriers from comedy – a portion of seats at every Kickstand show are pay-what-you-want at the door.

As three Black Americans, they utilize our unique voices to spark thoughtful conversations on and off comedy stages.

Through a candid dialogue, they’ll exchange their experiences with those of their audience—exploring deeper perspectives on comedy, relationships, and humanity.

“A group that clearly knows one another well and can build off each other with confidence.”-Portland Mercury

“This group is hard to predict but always puts on a wonderful show?”-Portland Mercury