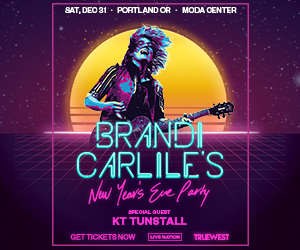 The nominations cap off a breakthrough year for the acclaimed singer, songwriter and performer following the release of By The Way, I Forgive You (Low Country Sound/Elektra Records). Produced by Grammy-Award winning producer Dave Cobb and acclaimed musician Shooter Jennings and recorded at Nashville’s historic RCA Studio A, the album includes ten new songs written by Carlile and longtime collaborators and bandmates Tim and Phil Hanseroth including “The Joke.”

Most recently, Carlile joined forces with Sam Smith on a new duet version of “Party Of One.” Recorded at L.A.’s Capitol Studios, a portion of the profits from this recording will be donated to Children in Conflict via Brandi Carlile’s Looking Out Foundation as part of its ongoing campaign to raise $1 million for children impacted by war.

Beloved by fans and critics alike, Carlile has performed sold-out concerts across the world and has appeared on various TV shows including The Ellen DeGeneres Show, The Late Show with Stephen Colbert, Jimmy Kimmel Live!, The Tonight Show, The Today Show, Conan and CBS This Morning.

Since scoring a worldwide smash with her debut album ‘Eye To The Telescope’ in 2004, which went on to sell over 5 million copies, KT Tunstall has remained at the forefront of UK singer- songwriter talent. Over the next decade, three further critically acclaimed albums followed; ‘Drastic Fantastic’, ‘Tiger Suit’ and ‘Invisible Empire//Crescent Moon’ in 2007, 2010 and 2013 respectively, keeping the platinum sales rolling and cementing the Scottish singer-songwriter’s reputation as a major recording talent, as well as a mesmerising live artist. Tunstall has toured the world many times over. She outsold every other female artist in the UK in 2005, won the 2006 Brit Award for Best British Female Solo Artist, won the Ivor Novello Best Song award for her huge, self-penned hit ‘Suddenly I See’, and a Q award for Track of the Year. She also landed a Grammy nomination for Best Female Pop Vocal Performance and lent her tunes to a host of movies and TV shows (‘Suddenly I See’, used in the iconic opening scene of Meryl Streep flick ‘The Devil Wears Prada’).