We are giving you another chance to WIN a pair of tickets to Yonder Mountain String Band @ Crystal Ballroom on March 25. To win, comment below on this post why you’d like to attend. Winner will be drawn and emailed March 20. 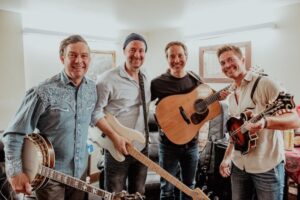 With their latest album, “Get Yourself Outside,” Colorado-based Yonder Mountain String Band once again echoes out into the universe their place as not only a pioneering jam-grass act, but also one of the most innovative groups in the live music scene – something the groundbreaking ensemble has proudly held high for the better part of a quarter-century.

“The whole thing has always been about the energy and the connection between all of us onstage and everyone out in the audience,” says guitarist Adam Aijala. “And with this iteration of Yonder Mountain, we’re really tapping into that onstage connection once again.”

This chapter of YMSB is one of my facets. Aside from the obvious nature of the new album, it’s a complete restart for the live music industry – slowly reawakening itself after a year and a half of radio silence during the early stages of the pandemic. Internally, it’s also a fresh start for the group in welcoming its newest member, mandolinist Nick Piccininni.

“Nick is an incredibly talented multi-instrumentalist. He’s also a great singer with a magnetic stage presence,” Aijala says. “And he’s in such a creative space right now, something that has brought a whole new vibe and dynamic to the band. But, at the same time, he’s such a natural fit.”

Recorded during the shutdown at Cinder Sound Studio (Gunbarrel, Colorado) co-produced by Yonder Mountain and John McVey, “Get Yourself Outside” (Frog Pad Records) is a musical odyssey of string instruments and sonic textures.

“We want the listener to get outside of your own head, get outside the box or container that you’ve created around yourself – look outside and see what else is out there,” says bassist Ben Kaufmann.

What started out as back-and-forth online interactions between the band members soon shifted into Yonder Mountain entering the studio after several months apart – this genuine, intrinsic urge within each musician to capture the unique chemistry and magic of playing live in the studio.

“We knew we had to take greater advantage of our time off the road. So, we started to collaborate and realized we had all of these songs,” Kaufmann says. “It was kind of a trick to figure out how to get together and record safely. But, we’re glad that we did and what came from it.”

“Some of the song ideas were older. But, a lot of the ideas happened during the pandemic,” Aijala adds. “It was interesting, because Nick had a bunch of ideas that emerged from the pandemic and he’s heavily featured on the record.”

There’s the usual foot-stomping melodies and sorrowful ballads that reside at the core of the Yonder Mountain signature tone. But, there’s also a deep, honest sense of renewal and rejuvenation running through the heart of the record.

“This album was a learning experience for the band, from bringing Nick in to navigating the shutdown as a nationally touring band to working on new material,” Kaufmann says. “There’s a blessing to this life to be able to play music for a living, and ‘Get Yourself Outside’ is a testament to that, which is why it’s been such a joy to finally play these songs live.”

Regardless of the free-flowing, ever-evolving ebb and flow of its sound and journey, Yonder Mountain still stands atop the ancient rock foundation of the “high, lonesome sound” that is bluegrass music.