We are giving away a pair of tickets to Yacht Rock Revue @ Aladdin Theater on January 16. To win, comment below on this post why you’d like to attend. Winner will be drawn and emailed January 10. 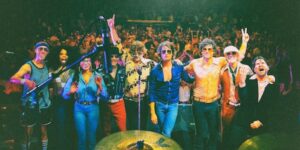 What is left for Yacht Rock Revue to prove? This top-notch group of musicians has already rocked onstage with John Oates, Eddie Money (RIP), and both versions of the band Player. They’ve trademarked the term “yacht rock,” both metaphorically and literally (U.S. Registration Number 3834195). From humble beginnings in a basement, touring in partnership with Live Nation and Sirius XM, they now headline sold-out shows across the country, from Webster Hall in New York to the Wiltern in L.A. While rising from bars to amphitheaters, they’ve ticked every box on the Rock Star Accomplishments bingo card. Except for one: Writing and singing their own songs.

Yacht Rock Revue’s first original record is ten songs inspired by the smoooooth sounds of the Seventies and Eighties. They’ve brazenly titled it Hot Dads In Tight Jeans – forgive them for bragging, but that’s what they are – and it returns Yacht Rock Revue to their roots in original music.

“I had a midlife crisis. That’s why we made this album,” says Nick Niespodziani, the group’s singer, guitarist, and spiritual leader. “Everyone in the band is a dad now, so we needed to make this happen, before we become grandpas. I’ve sung ‘Escape’ by Rupert Holmes at least a thousand times, and if that isn’t paying your dues, I don’t know what is.”

It’s rare that musicians in their 40s chase their rock star dreams. You’d have to be crazy to try. YRR knew they were underdogs, but resolved to take one more shot at the Top 40, and maybe even become a Cinderella story of midlife fulfillment.

Yacht Rock Revue began in the least-yachtiest of states, 2,000 miles from breezy Marina del Rey. Niespodziani and Pete Olson met in the fourth grade in suburban Indiana, went on to Indiana University in the late Nineties, formed the band Y-O-U, then escaped – Rupert Holmes reference intended – to Atlanta. One night, Y-O-U tucked their tongues deep in their cheeks and played a show of Yacht Rock songs. The rowdy (a nice way of saying drunk), sold-out crowd loved it.

Over the years, YRR (there’s also a Dave, a Greg, and literally three guys named Mark) have turned themselves into human wine spritzers, playing 120 to 150 shows a year, mastering Yacht Rock’s slick chords and mellow grooves, and partying like it’s 1979. What began as a joke among friends soon put a ripple in the zeitgeist, starting a national trend through YRR’s concerts, lauded as “unabashedly joyous affairs” by Entertainment Weekly. They accumulated an extensive wardrobe of white belts and polyester shirts. Yacht Rock Revue were revered and well-compensated! Their life was a tenor sax solo! This is what every musician wants.