We are giving away a pair of tickets to The Milk Carton Kids & Haley Heynderickx @ Revolution Hall on September 9. To win, comment on this post why you’d like to attend. Winner will be drawn and emailed September 2. 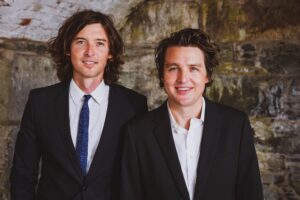 The Milk Carton Kids
Listening to The Milk Carton Kids — Joey Ryan and Kenneth Pattengale — talk about their creative process, it’s easy to imagine them running in opposite directions even while yoked together. “Joey and I famously have an adversarial relationship,” Pattengale says. They dig at each other in interviews and on stage, where Ryan plays his own straight man, while Pattengale tunes his guitar. The songs emerge somewhere in the silences and the struggle between their sensibilities. They have been known to argue over song choices. They have been known to argue about everything from wardrobe to geography to grammar. But their singing is the place where they make room for each other and the shared identity that rises out of their combined voices. Defying the conventions of melody and harmony is a strategy The Milk Carton Kids have consciously embraced. “Sometimes we’ll switch parts for a beat or a bar or a note,” Ryan says. “And that starts to obfuscate what is the melody and what is the supporting part because we think of both of them being strong enough to stand alone.”

It takes a mix of skill and luck to tend a garden well, but it’s impossible without a certain amount of kindness tended. While the cyclical nature of gardening seems inherent, in some ways, Heynderickx is just beginning. Her debut album, named ​I Need to Start a Garden​ out of a search for calm through these waves of uncertainty and upheaval, is out now via Mama Bird Recording Co.