We are giving away a pair of tickets to The Lone Bellow – Love Songs for Losers Tour @ Revolution Hall on February 9. To win, comment below on this post why you’d like to attend. Winner will be drawn and emailed February 6. 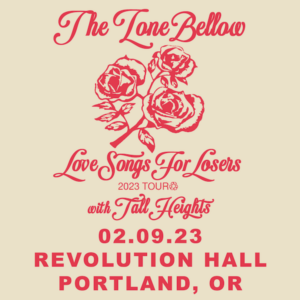 Throughout their lifespan as a band, The Lone Bellow have cast an indelible spell with their finespun songs of hard truth and unexpected beauty, frequently delivered in hypnotic three-part harmony. In a departure from their past work with elite producers like Aaron Dessner of The National and eight-time Grammy-winner Dave Cobb, the Nashville-based trio struck out on their own for their new album Love Songs for Losers, dreaming up a singular sound encompassing everything from arena-ready rock anthems to the gorgeously sprawling Americana tunes the band refers to as “little redneck symphonies.” Recorded at the possibly haunted former home of the legendary Roy Orbison, the result is an intimate meditation on the pain and joy and ineffable wonder of being human, at turns heartbreaking, irreverent, and sublimely transcendent.

“One of the reasons we went with Love Songs for Losers as the album title is that I’ve always seen myself as a loser in love—I’ve never been able to get it completely right, so this is my way of standing on top of the mountain and telling everyone, ‘It’s okay,’” says lead vocalist Zach Williams, whose bandmates include guitarist Brian Elmquist and multi-instrumentalist Kanene Donehey Pipkin. “The songs are looking at bad relationships and wonderful relationships and all the in-between, sometimes with a good deal of levity. It’s us just trying to encapsulate the whole gamut of experience that we all go through as human beings.”

For The Lone Bellow, the triumph of completing their first self-produced album marks the start of a thrilling new chapter in the band’s journey. “At the outset it was scary to take away the safety net of working with a big-name producer and lean on each other instead,” says Pipkin. “It took an incredible amount of trust, but in the end it was so exciting to see each other rise to new heights.” And with the release of Love Songs for Losers, the trio feel newly emboldened to create without limits. “This album confirmed that we still have beauty to create and put out into the world, and that we’re still having fun doing that after ten years together,” says Elmquist. “It reminded us of our passion for pushing ourselves out onto the limb and letting our minds wander into new places, and it sets me on fire to think of what we might make next.”