We are giving away a pair of tickets to Kublai Khan TX @ Bossanova Ballroom on September 2. To win, comment below on this post why you’d like to attend. Winner will be drawn and emailed September 2. 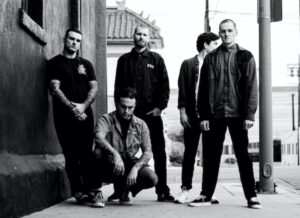 Stick To Your Guns
Since emerging in 2003, Southern California’s Stick To Your Guns—Jesse Barnett [vocals], Andrew Rose [bass], George Schmitz [drums], Chris Rawson [guitar], and Josh James [guitar]—have merged socially conscious and outspoken lyricism with hardcore energy and hammering metallic force. They took a bold step in a new direction on their sixth full-length album, True View [Pure Noise Records] by expanding their grasp of melody, amplifying the haunting clean vocals, and incorporating actual phone conversations to thread together a narrative of self-realization. It was only a matter of time before they got this personal. Through countless shows and a steady stream of music, the band attracted a devout fan base. Among many accolades, Diamond would bow at #1 on Billboard’s Heatseekers Chart in 2012 as 2015’s Disobedient went Top 100 on the Billboard Top 200. 2016 EP, Better Ash Than Dust, repeated the #2 debut on the Hard Rock Albums Chart and earned acclaim from Alternative Press, Revolver Magazine, New Noise Magazine. Moreover, 2017 saw Stick To Your Guns make history, becoming “the first American hardcore band to play East Africa” in Nairobi, Kenya. Along the way, Stick To Your Guns toured across the globe with everyone from Every Time I Die and The Amity Affliction to BlessTheFall and Being As An Ocean in addition to multiple stints on the Vans Warped Tour. True View will once again bring them around the world in 2017.

Kublai Khan TX
Not to be confused with the ’80s speed metal band of the same name, Kublai Khan are a metalcore quartet from North Texas who formed in the summer of 2009. The group’s aggressive, punishing sound combines monstrous riffs and thrashing blastbeats with thoughtful lyrics that address issues such as racism, depression, and addiction.

The group consists of guitarist/vocalist Nolan Ashley, vocalist/lyricist Matt Honeycutt, bassist Eric English, and drummer Isaac Lamb. After forming in 2009, they self-released their debut EP, Youth War, in January of 2011. The group built up a fan base through solid regional and national touring, and eventually opened for bands such as the Acacia Strain, Fit for a King, and Texas in July. The group signed to Artery Recordings in early 2014, releasing their debut full-length, Balancing Survival and Happiness, that spring. Kublai Khan toured Europe with Obey the Brave in the spring of 2014, and appeared at the Impericon Festival in Germany. The group’s second album, New Strength, appeared on Artery the following year. In 2017, the band inked a deal with Rise Records and issued their third studio long-player, Nomad. ~ Paul Simpson