We are giving away a pair of tickets to Swashbuckler’s Ball @ Milwaukie Elks Lodge on January 21. To win, comment below on this post why you’d like to attend. Winner will be drawn and emailed January 16. 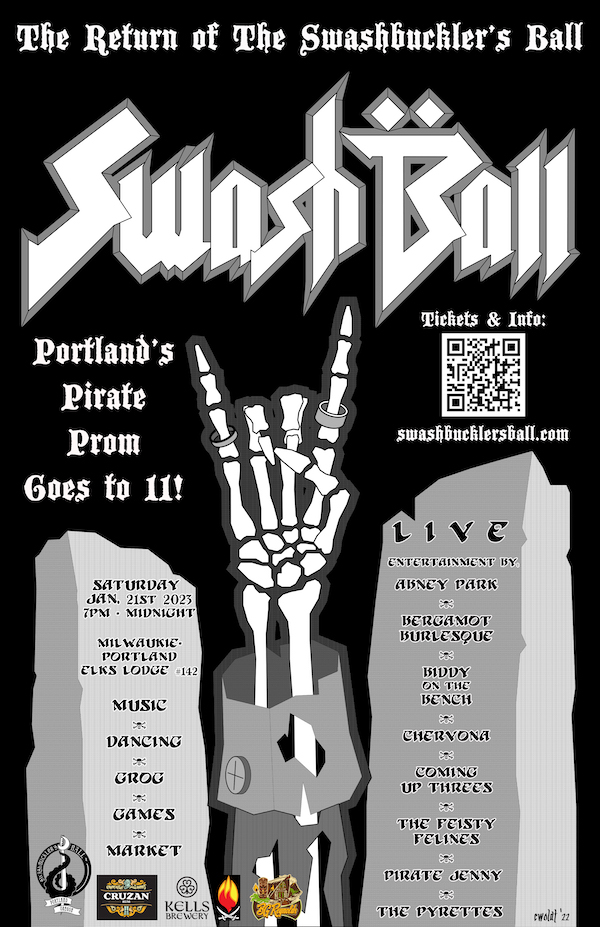 Hold fast and make ready, the Swashbuckler’s Ball returns for a glorious 11th year! Join the crew for Portland’s Pirate Prom on Saturday, January 21st, 2023 as we return to the Milwaukie Portland Elk’s Lodge. A grand night out for pirates, buccaneers, and nautical miscreants of all stripes. Dance the night away while enjoying some of the greatest music, grub, and grog this side of Tortuga!

ABNEY PARK
Music from a time that never was, but may still come to pass. Seattle’s airship pirates return to the Swashbuckler’s Ball for the first time since 2013!

CHERVONA
Chervona returns to SwashBall for their 9th year! Experience the ultimate International Folk and dance party machine out of Portland! Combining the energy and passion of Eastern European pop, American jazz, punk, and disco with Romani folk music, Chervona brings to the game a fiery new and compelling sound.

COMING UP THREES
Celtic-inspired, pint-raising music. CU3 is legendary for their energy and bravado. This will be the 7th time the band has played on the SwashBall stage!

PIRATE JENNY
Portland’s original pirate rockers return with a vengeance! Pirate Jenny has been sailing Portland’s five quadrants for at least two decades, in one form or another. Polish your hook and have your sack of limes ready, Pirate Jenny will be taking the Quarterdeck Stage by force!

BERGAMOT BURLESQUE
A SwashBall favorite, Bergamot returns with a troupe of performers and their signature sultry nautical burlesque show.

THE PYRETTES
Music to plunder by! This hot Portland-based band re-invents the classic sea shanty with twists of genre and brilliant harmonies, capturing Blues, Celtic, Nordic, Latin, Calypso, Country, and even a few forced men!

THE FEISTY FELINES
The Feisty Felines are a group of beautifully dressed playful pirate cat girls. Look for their SwashBall debut on stage in The Bayou.