We are giving away a pair of tickets to Surf Curse, Toner @ Crystal Ballroom on November 12. To win, comment below on this post why you’d like to attend Winner will be drawn and emailed November 7. 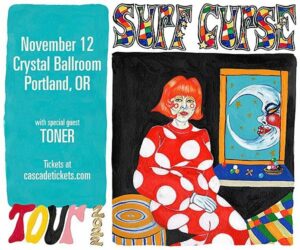 Surf Curse’s Nick Rattigan and Jacob Rubeck have been crafting sounds spanning from punk to psych rock for nearly a decade with a rabid and dedicated international fanbase and no end in sight. With new members Noah Kohll and Henry Dillon, the band brings together a collage of sounds on ‘Magic Hour,’ their fourth LP and first release since signing with Atlantic Records. Featuring Rattigan on drums/vocals, Rubeck on guitar/vocals, Dillon on bass and Kohll on guitar, ‘Magic Hour’ is a rock-music exploration that ranges from ’70s rock to ’90s alternative to 2010s-style indie and combines each member’s creative input to create an experimental record. ‘Magic Hour’ explores all aspects of rock-music with blistering indie punk “Arrow,” pop-infused “Sugar,” sing-along “Lost Honor” and somber yet fanatic blues rock “No Tomorrows.” Rubeck says, “This album is the excitement of starting something that we all can feel good about with each other, but also progressing as creative people and throwing in that magic. We’re feeling that magic, what’s brewing in the air and what’s existing in what we’re doing together.”

Toner
Toner was originally formed in 2014 as a slowcore solo project by Samuelito Cruz in West End. After the release of the first self-titled EP there was interest from a couple labels in releasing a debut LP from Toner. Cruz had immediately started writing & recording it in a shed in the backyard of his childhood home. Toner had formed as a real live band by mid 2015 adding Kennan Sommer, Maxwell Carver & Sean Glass in the band & started touring in 2016 following the release of their later dream pop-esque 7inch EP “Passing Glance” on Oakland punk label Digital Regress. The band recorded a third EP in 2017 titled “Killing Pace” recorded in Cruz’s bedroom in Oakland an addition to their first & only “studio” album “Silk Road” in 2020 recorded at The Balboa Studio in Los Angeles. Both released through their own bay area stronghold label Smoking Room. After the departure of bassist Kennan Sommer, Cruz began to record Toner’s third album “White Buffalo Roam” in his bedroom which was released later this year on Smoking Room. Toner is & will always hold true to their bay area roots in the DIY underground music scene.