We are giving away a pair of tickets to Night One of Storm Large Holiday Ordeal @ Aladdin Theater on Friday, November 25. To win, comment below on this post why you’d like to attend. Winner will be drawn and emailed November 21. 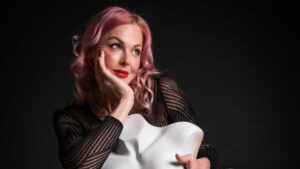 What better way to celebrate the holiday season than with Storm Large? Storm will love you, leave you, delight you and abuse you with a wicked charm and stunning vocals that will have you begging for more. Storm returns November 25 + 26 with her 15th annual “Storm Large Holiday Ordeal”, a night of music, gags, gifts and some very special guests.

About Storm Large
A performer of extraordinary gifts, Storm Large has been singing around the globe for 20+ years. Portland, Oregon club goers remember her as the lead singer of Storm and the Balls and their long standing weekly run at Dante’s. She shot to national prominence in 2006 as a finalist on the CBS show Rock Star: Supernova. The following year she took a career departure and starred in Portland Center Stage’s production of Cabaret with Wade McCollum. The show was a smash hit, earning Large glowing reviews and reigniting her love of theater.

In the summer of 2021 Storm made the semi-finals on NBC’s America’s Got Talent, performing her phenomenal rendition of “I’ve Got You Under My Skin”

Her musical memoir, Crazy Enough played to packed houses in 2009 during its unprecedented 17 week sold-out run in Portland. Storm performed the show to critical acclaim at the Edinburgh Fringe Festival, Adelaide, Australia Cabaret Festival and Joe’s Pub in New York.

No stranger to orchestras, Storm debuted with the Oregon Symphony in 2010, playing in front of a wild, sold out crowd. She returned for concerts with the Oregon Symphony every year since and made her Carnegie Hall debut with the Detroit Symphony in May of 2013, earning rave reviews for her performance in Brecht/Weill’s The Seven Deadly Sins. In May, 2015 she appeared with the NY Pops at Carnegie Hall and the Kennedy Center in “Let’s Be Frank”, an evening featuring the music of Frank Sinatra.

Highlights of her 2017-18 season included debuts with the San Francisco, Pittsburgh, Phoenix, Vancouver, Jacksonville, and RTÉ National Symphonies, as well as return engagements with the Houston, Toronto, and Toledo Symphonies.

In 2015 she was named “Artist of the Year” by the Oregon Music Hall of Fame. Recent appearances include performances at the Oregon Symphony, the Disney Concert Hall in LA and a multi-night run at 54 Below in NYC. She also joined Michael Feinstein as a special guest at the Pasadena Pops, sharing the stage with Liza Minnelli and Joel Grey.

Storm is featured in Rid of Me, a film by Portlander James Westby, starring Katie O’Grady and Theresa Russell. In 2010 she starred at the Mark Taper Forum (L.A.) with Katey Sagal and Michael McKean in Jerry Zak’s production of “Harps and Angels”, a musical featuring the work of Randy Newman.

Storm made her debut as guest vocalist with Pink Martini in April, 2011, singing four sold-out concerts with the National Symphony Orchestra at the Kennedy Center in Washington DC. She has continued to tour as a guest vocalist with Pink Martini throughout Europe and the US to wide acclaim. Storm has also sung with Grammy winner k.d. lang, pianist Kirill Gerstein, punk rocker John Doe, singer-songwriter Rufus Wainwright, and EGOT winner Rita Moreno.

Storm’s 2012 memoir, Crazy Enough (Free Press/Simon +Schuster) won the Oregon Book Award, was Oprah’s Book of the Week and won rave reviews everywhere, from Publishers Weekly to People Magazine.
Though a successful author, actor and playwright, this former “Punk Goddess” prefers the sweat soaked burn of her live shows, and once you’ve experienced Storm live, you will be supremely grateful she does. Storm, music, gags and guests: What a great way to start the holiday season!