We are giving away a pair of tickets to Steve Earle & The Dukes @ Revolution Hall on August 18. To win, comment below on this post why you’d like to attend. Winner will be drawn and emailed  August 15. 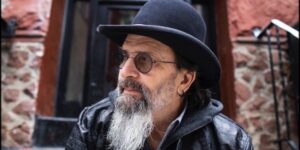 JERRY JEFF is Earle’s 22nd album. He’s released nearly an album a year since getting sober in the mid 1990s, LPs ranging from bluegrass to blues to folk to country. One of America’s most gifted living songwriters, he is singing better than he ever has, working harder. At the moment, he’s writing two books, his second play, and hosts his long running The Steve Earle Show: Hardcore Troubadour Radio on Sirius XM. Throughout the pandemic, he also hosted Steve Earle’s Guitar Town, a YouTube series about his massive instrument collection. “I’m just trying to stay out of trouble,” says Earle with a laugh. “If I stay busy, then I’m OK.”

Earle has the rest of 2022 mapped out. After the release of JERRY JEFF, he’ll hit the road on June 1st with the Dukes. After that, he’ll teach Camp Copperhead, his songwriting camp, in Big Indian, New York, and then put John Henry back in school and start up work again on Tender Mercies. “It’s always been on my own terms,” Earle says. “My career maybe isn’t as big as it could be. But it would be unseemly for me to complain too much. … I still feel lucky to be able to make a living doing something that I love. And I still make an embarrassing amount of money for a borderline Marxist.”