We are giving away a pair of tickets to Skerryvore @ Mission Theater on April 16. To win, comment below on this post why you’d like to attend. Winner will be drawn and emailed April 10. 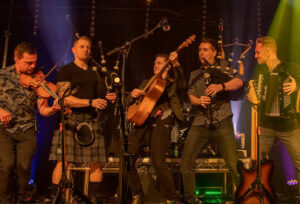 Over the last 16 years, Skerryvore have brought their performances to audiences across the globe, from their early days in Scottish West Coast halls and bars, to Festival crowds in USA, Canada, Australia and throughout the UK and Europe. Picking up Scottish music’s ‘Live Act of the Year’ twice on the way – the band’s wide range of influences and talent produce a musically expansive, high energy set that excites and captivates audiences. Their 6 studio albums demonstrate the wide range of influences the individual musicians bring to the mix – a unique fusion of folk, trad, rock and pop.

The impact of the Covid-19 crisis decimated the band’s touring and performing calendar for 2020, and well into 2021. During this time Skerryvore explored and developed alternative performance possibilities, including live streaming and virtual performances that connected them with 28 countries worldwide and over 30,000 viewers. The band’s lockdown single, ‘Everyday Heroes,’ recorded from home, and aided by a variety of musicians from across the country, achieved the band’s first Official Charts No.1 in Scotland and, so far, has raised several thousands of pounds for NHS staff charities.

In January 2021, Skerryvore were selected for the BBC Radio 2 Playlist for 6 consecutive weeks with their song ‘You&I’, progressing from the C list up to the prestigious A List due the the amazing response from listeners. Multiple daily plays and a great response from the presenters, has seen Skerryvore reach a whole new fanbase. This success was followed by a second BBC Radio 2 playlist for their summer single ‘Together Again’ in July 2021

Skerryvore create a unique feel good, folk-fusion sound that has enabled the band to break ‘traditional boundaries’ both nationally and internationally with performances in over 30 countries worldwide.