We are giving away a pair of tickets to REHAB @ Ponderosa Lounge & Grill on April 16. To win, comment below on this post why you’d like to attend. Winner will be drawn and emailed April 11. 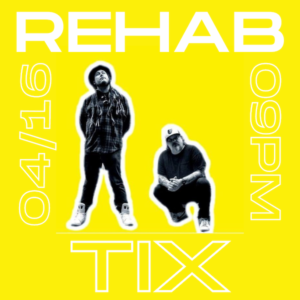 Now led by front man, Danny Boone, rehab has once again been rehabbed. Anchored by their influence of all things hip-hop, from Run DMC and NWA, to a Tribe Called Quest and more, Rehab set out over a decade ago on their own musical journey that would garner them millions of hardcore fans, selling over one million albums and streamed over 400,000 million times.