We are giving you another chance to WIN a pair of tickets to The Midnight @ Crystal Ballroom on September 29. To win, comment below on this post why you’d like to attend. Winner will be drawn and emailed September 26. 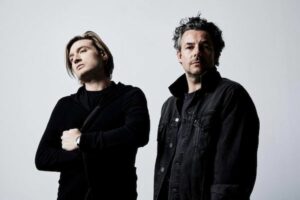 “We stick to the archetypes. A literal world isn’t interesting. We’re trying to put a skin around the symbols and myths that civilization has told itself for 10,000 years. The better the symbol and the more universal the myth, the more people can create a world for themselves from their memories and desires. That’s the goal: Give the audience enough raw material to make the world their own.”
– Tyler Lyle of The Midnight

The Midnight, the duo of producer Tim Daniel McEwan and singer-songwriter Tyler Lyle, are masters of flipping the disparate archetypes of yearning American youth – think everything from John Hughes films and the Smashing Pumpkins’ “1979” music video to Snapchats of ravers losing it to a big bass drop and the lonesome sway of the “lofi hip hop radio – beats to study / relax to” YouTube channel – into their own modern collage that finds a throughline between generations of teenage ennui.

Their music fuses this Americana with an evocative electronic palette that incorporates synth-driven film scores, dance music, synth-pop, and rock, creating an enveloping harmony of richly textured sonics and poignant lyrical imagery. Each song cultivates a story written on a bedrock of universal themes and eternal hooks, coming together to create a body of work that unifies an enthusiastic global fan base.